Christians Drown Out Trans Rights Supporter by Singing “Jesus Loves Me” at SC School Board Meeting May 3, 2016 Hemant Mehta

We know that conservative Christians have an irrational fear of people who use the appropriate bathroom when they don’t “look” the part. And their Jesus-approved transphobia went into full stride yesterday afternoon.

While some of their colleagues in Christ were yelling at people in Target stores, hundreds of Christians turned up at a meeting of the Horry County Board of Education in South Carolina as the board discussed how to handle transgender students and their bathroom usage. Some of them held up signs reading “Keep Kids Safe” and “It’s Common Sense.”

One brave parent, Melanie Moore, made an impassioned plea to the crowd to support trans rights… but after six minutes of talking, during which she was repeatedly asked if she believed in the Word of God (as if that’s relevant at a school board meeting), her words were drowned out by a sea of bigots who began singing the Christian hymn “Jesus Loves Me” in order to shut her up. 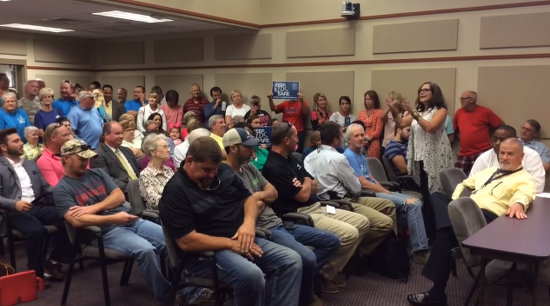 One supporter of transgender rights, Melanie Moore, stood up to the crowd and argued that transgender people should not be lumped into the same category as pedophiles, rapists or other criminals. She also tried to explain how transgender students are born one sex, but feel as though they should have been born the opposite gender — though she was shouted over by many members of the crowd.

The verbal arguments and palpable tension lasted about 7 minutes.

The Board ultimately said trans students could use the bathrooms that aligned with their gender identity, but only because saying otherwise would have cut their federal funding. It was the right decision for the wrong reason.

May 3, 2016
Was This Employee Fired Because She Wouldn't Watch Scientology Videos?
Next Post

May 3, 2016 Jehovah's Witnesses Release Disturbing Anti-Gay Video Aimed at Children
Browse Our Archives
What Are Your Thoughts?leave a comment