Justin Scott, the Iowan who did a fantastic job earlier this year of getting presidential candidates on the record about their views on atheists and church/state separation, gave the first-ever atheist invocation in the city of Waterloo last night. 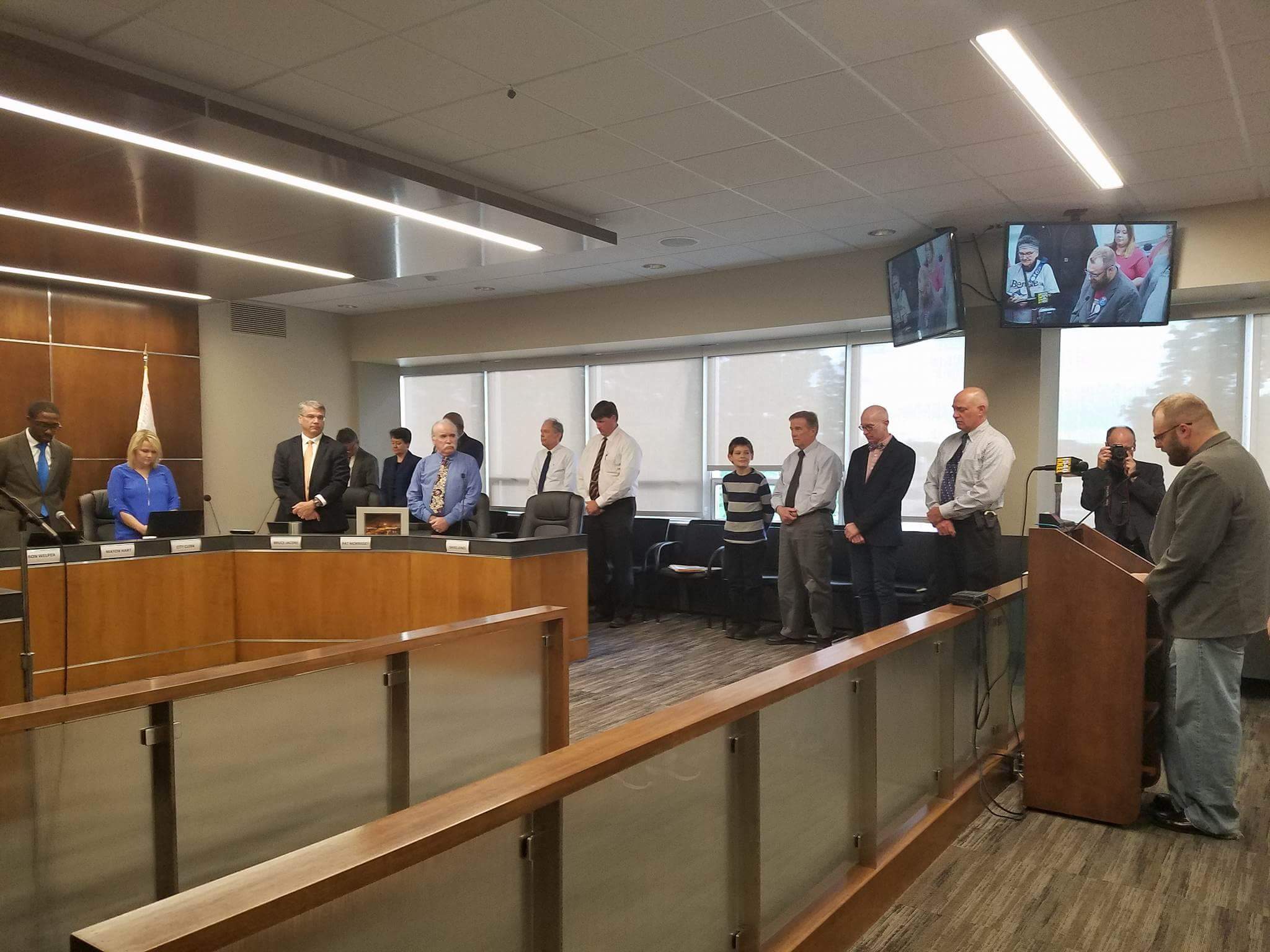 I want to start off by just thanking you for this opportunity to hopefully provide an inspirational start to your meeting tonight and do so from a minority point of view. My name is Justin Scott. I am a proud atheist here in Waterloo. I stand before you all humbly representing the Cedar Valley Atheists, the Eastern Iowa Atheists, and the growing and vibrant secular community across Waterloo and the state of Iowa.

The secular community is made up of atheists, Agnostics, Humanists, secularists and skeptics predicated on community without the aid of the supernatural. It is also committed to defending and strengthening the separation of church and state while promoting positive non-­theism and critical thinking. Regardless of the label they identify with, these are happy, compassionate, and productive members of our society, and I am proud to be representing them in this chamber tonight.

Tonight, as our elected officials work to make the best decisions for the city of Waterloo and the residents that call it home, instead of closing our eyes and bowing our heads in prayer, let us instead keep focused on the serious issues that our city government faces. And as our elected officials take on these issues head on in their thankless positions, let us all embrace the indelible words of some of the most influential freethinkers, past and present, starting with one of the leading astronomers of our time, Dr. Carl Sagan.

And I quote: “Every one of us is, in the cosmic perspective, precious.” End quote.

Regardless of the issues that get deliberated by this body tonight and in the future, regardless of its accomplishments and shortcomings, it’s with the sentiment of Dr. Sagan’s comment that this chamber should conduct its business tonight and going forward. Each of us in here and across this city is precious; no citizen is more important than any other.

Let this chamber ​keep in mind that with every yay or nay vote, precious lives of Waterloo citizens will be affected. While coming to their decisions, this chamber should rely solely on reason, observation, and experience, or, as Robert Ingersoll, “the Great Agnostic” of the mid­-1800s, referred to as the “holy trinity of science”.

Let this chamber ​deliberate with the understanding that not everyone in the room shares the same values, the same life experiences, or same religious beliefs. These differences can help to enrich these governmental tasks, but only when they aren’t used to limit or censor free speech, denigrate or treat certain groups as second-­class citizens, or promote religious belief over non-­belief or one religious belief over all the others.

Let this chamber ​keep in mind that in every circumstance the minority viewpoint is just as valuable as the majority one. The rights and dignity of all Waterloo citizens should be respected regardless of their race, gender identity, sexuality, religious belief, or lack thereof, for the future and well-­being of our great city is enriched only when its diversity is embraced and equality for all is held as a guiding principle. With that said, I appeal to this chamber to follow one of the many tenets of Humanism that reads “We are concerned with securing justice and fairness in society and with eliminating discrimination and intolerance.”

Let this chamber​ never forget that even though their beliefs often inspire their decisions, many decisions have real world implications so they should never be made in haste. Every decision made in this chamber should be the product of informed reason, inquiry, and skepticism. As the 18th-­century philosopher David Hume reminds us, “Reason is, and ought only to be the slave of the passions, and can never pretend to any other office than to serve and obey them.”

Let this chamber ​never simply give in to the status quo as it ​can be a dangerous way of thinking and has historically been on the wrong side of history. Oftentimes the status quo is the result of cherished beliefs and an unwillingness to let go of those beliefs, even for only a moment or for the sake of bending the arc of the moral universe towards justice. Cherished beliefs have helped fuel the perceived superiority of the white man which droves millions of Native Americans off their native land, the status quo is what allowed African Americans to be counted as only 3/5ths of a person in the country they helped build and create. It’s what kept the voices of millions of women out of the voting booth. It’s what kept our LGBT brothers and sisters from being treated with the dignity they deserve. And it’s what is currently keeping atheists and non-­theists from being viewed as equals to everyone else in American society.

Just as you’ve welcomed an atheist to take part in this invocation process for the first time, you are encouraged to build on tonight to make your government even more open and accessible to more people which will help make it as inclusive as possible. Open your arms to other Waterloo citizens living in the shadows of a certain minority group; together we truly will achieve more and the experience will be much more rewarding.

In closing, I’d like to leave you with a thought from Thomas Paine, founding father of the United States and English-­American political activist: “The world is my country, all mankind are my brethren, and to do good is my religion.”

While the invocation went off without a hitch, one citizen denounced it during the public comments portion of the evening (1:36:10 mark):

I do have a question, if I may: How often will this atheist be speaking at the meetings?

Mayor Quentin Hart, to his credit, tried explaining that invocations should be inclusive, so there would be diversity of speakers. Which was a polite way of telling the speaker no one cared about her whining.

And then, just to top it off, Hart signed a proclamation saying that May 5 would be the Day of Reason in Waterloo: 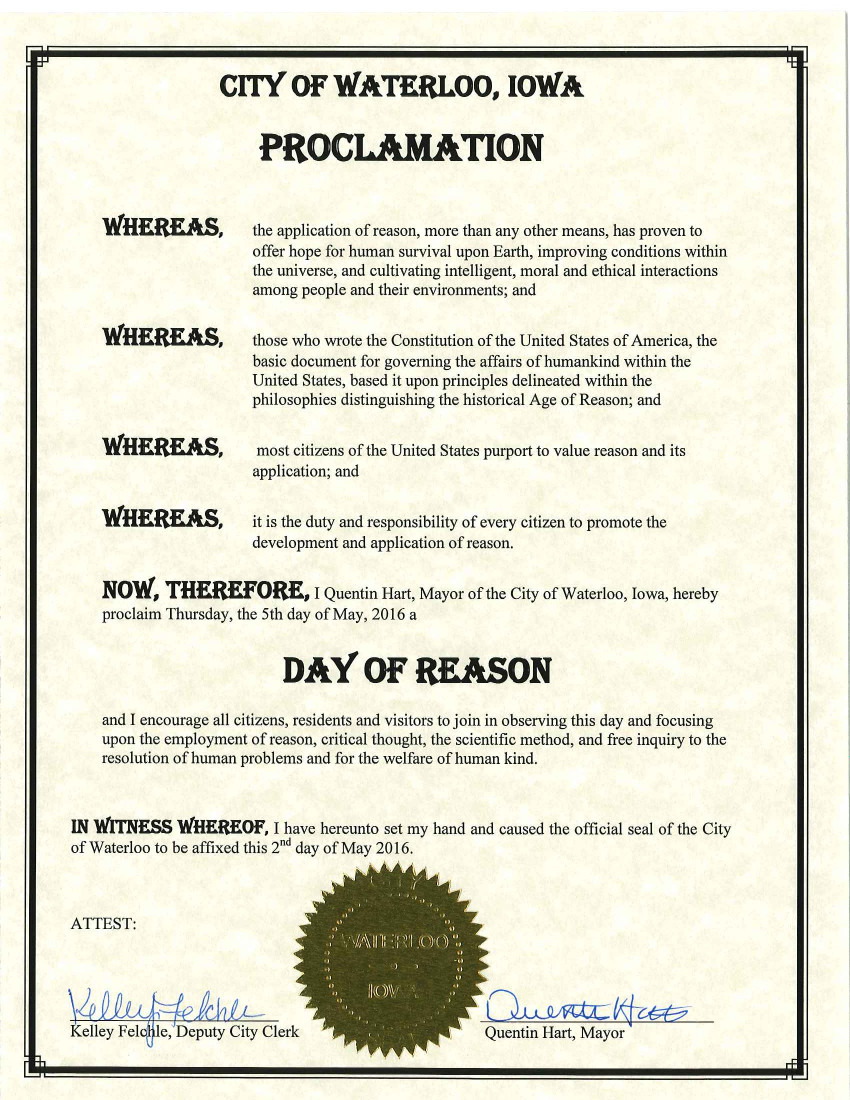 Justin tells me a similar proclamation will be issued tonight in Iowa City.

May 3, 2016
Gay Imam Nur Warsame Steps Out of the Closet
Next Post