Well, we knew this was coming. Boycotting Target over the company’s decision to have trans-inclusive restrooms wasn’t enough to ease all of those in moral disagreement. So while some Christians are purposely heading to the bathroom of the opposite gender to prove some warped point, others are preaching the Word in person, slinging some harsh judgment upon everyone in the store. 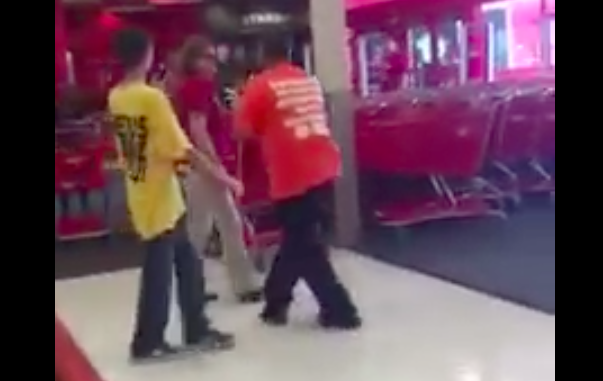 In a video captured by onlooker Holly Taylor, two men walked into the Hendersonville (Tennessee) Target store, one evangelizing at the top of his lungs, the other walking alongside him with an obnoxious “Jesus will judge you” t-shirt and camera in hand.

They were eventually escorted out of the store by employees, but the fiasco continued in the parking lot (where no souls appeared to need saving).

Homosexuals shall not inherit the Kingdom of God. That’s your Good News today. The God for Jesus Christ is going to destroy everyone of you unless you repent and believe the gospel. God condemns all ungodliness. He’s gonna destroy…

Their strategy amounts to nothing more than:

Can you imagine if atheists did something similar inside their church, warning people they were being brainwashed? It’d be the plot of God’s Not Dead 3.

Given that raising your voice is what you do when you have nothing reasonable to say, I guess we should be happy that anti-LGBT Christians clearly have nothing else in their bigotry playbooks.

May 2, 2016
It's a Deeply-Held Religious Belief; Why Shouldn't Naked Jain Monks Defecate in the Open?
Next Post