Another Evangelical Group Invades Target in Protest of Trans Bathroom Decision May 2, 2016 Tracey

Just hours after first posting about a couple of God-fearing goons who marched into a Target store to startle and harass shoppers over their Bible-masked bigotry, another video has surfaced.

This one’s from a Portland, Oregon based group called Portland Street Preachers.

This video is far more interesting than the last one because the customers and staff aren’t afraid to talk back. 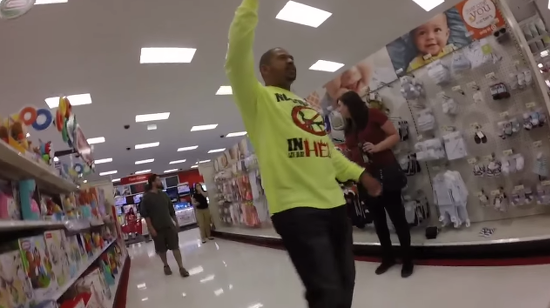 CHRISTIAN PREACHER: Target, this is your wake-up call. The Bible says that from the beginning, God made the male and female. He didn’t make transvestites. He made them male and female.

SOMEONE ELSE: Hey bro, you gotta go.

PREACHER: Jesus said, “He that justify the wicked, and condemneth the just, both are an abomination.”

SOMEONE ELSE: You gotta go.

PREACHER: Both are an abomination. Target, this is your warning, you will be judged according to God’s standards.

SOMEONE ELSE: Shut up.

PREACHER: Not man, but God.

SOMEONE ELSE: Shut up.

SOMEONE ELSE: Shut up and leave.

PREACHER: “Choose this day, whom you will serve.”

SOMEONE ELSE: Paying customers only.

PREACHER: You need to repent, or you’re going to see the lake of fire on Judgment Day.

PREACHER: You will see the lake of fire on Judgement Day.

PREACHER: You will be judged. And if there’s Christians in here supporting this abomination, shame on you!

It goes on like that for a while as a security officer tells him he’s being fined for criminal trespassing.

It all seems futile, kind of like yelling at a Chick-fil-A cashier because you don’t like the company owner’s politics. The Target shoppers and employees at this particular store didn’t create the trans-inclusive restroom policy, but they’re the ones who ultimately have to listen to his yelling. It’s completely misdirected anger.

I can’t help but suspect this guy and others like him are being this aggressive only because they know they’re on the losing side of history.

May 2, 2016
Late Nazi Sect Leader, a Pedophile Minister, Is Back Under Scrutiny After Release of Secret Files
Next Post