Lindsey Graham Says Lucifer May Be “the Only Person Trump Could Beat in a General Election” May 1, 2016 Hemant Mehta

On CBS’ Face the Nation this morning, Graham said that Lucifer was “the only person Trump could beat in a general election” and that “Trump polls like Lucifer” when it comes to women and Hispanics. 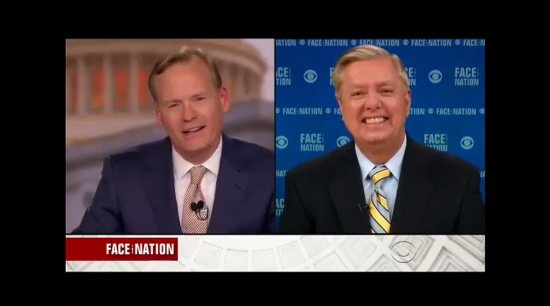 Considering 20% of the country doesn’t even believe in the devil, they really have no reason to dislike him… and a lot of the people who do believe in Satan have no personal beef with him, and don’t attribute every bad thing in the world to him. They think of him as nothing more than a metaphor.

Meanwhile, Trump is alienating damn near everyone.

I’m just saying Lucifer would give him a good fight. Sure, Satan wouldn’t win over the Religious Right, but he’d get some support from all the other major voting blocs. He’d definitely have the votes of everyone in the #NeverTrump movement. And if Bernie Sanders‘ supporters are all “comrades,” and the primaries are open, they’re totally gonna vote for the guy in red.

May 1, 2016
Army Sexual Harassment Speaker Tells Crowd They Can Only "Overcome the Horrors of Rape" with Jesus
Next Post

May 1, 2016 Meanwhile, in Murphy, North Carolina, a Gun Store Prepares For the Coming Crusade
Browse Our Archives
What Are Your Thoughts?leave a comment