The music video for Tyler Glenn’s new single “Trash” is a stunning rebuke of the Mormon Church. 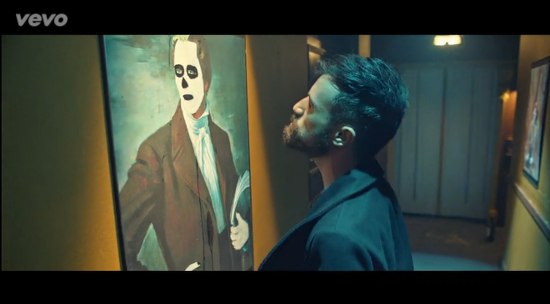 Tyler, the lead singer for the Neon Trees, struggled with his faith for years, especially after coming to terms with his homosexuality.

Tyler grew up in a strict Mormon family in California. He attended weekly services, performed hymns at firesides, and took part in other special church events. At 19, as Mormon men are required to do, Tyler cut his “punk” hair and served an LDS Mission to Nebraska, spreading the Church’s message and his own testimony.

Realizing that he was gay, however, took a terrible toll on Tyler. The Church of Jesus Christ of Latter-Day Saints considers homosexuality to be a sin and has strenuously fought against both marriage equality and hate-crime legislation with protections for LGBT citizens. Tyler did his best to balance his sexuality and his LDS faith, going so far as to defend the Church when he publicly came out in Rolling Stone, telling the magazine, “I don’t know what the rumors are, but we’re not taught that ‘homos are going to hell’ on Sunday in church.”

Last November, however, was the last straw for Tyler, as it was for many Mormons. As he told John Dehlin on the Mormon Stories podcast, he was home with his family to attend the baptism of his 8-year-old nephew. The night before the baptism, it came to light that the LDS Church now considered homosexuality to be apostasy, on par with rape and murder. The Church also said children of married homosexual couples would not be allowed baptism or other sacred LDS ordinances unless they disavowed their parents’ relationship.

Tyler was completely devastated. He had given all he could to the Church. He had done everything he knew to make this Church work for him. But this new policy was a bridge too far. He knew there was no way to reconcile the Church’s beliefs with what he knew to be true, and he finally began questioning his faith and exploring the validity of LDS Church history.

That very weekend, via God’s Folly (a.k.a. the Internet), he discovered, as so many do, so much of what had been kept hidden from him and other church members: the multiple versions of Joseph Smith’s First Vision, Smith’s polygamy, etc.

That’s when he shed his faith for good.

And like the talented artist that he is, Tyler got to work expressing his discoveries. His first solo single, “Trash,” is the astounding result.

The video contains so much appropriately angry imagery.

Tyler appears in the video by himself, first drinking from a wine bottle (which is forbidden in the Mormon faith). He walks down a hallway adorned with altered LDS artwork, such as Joseph Smith’s official portrait, the First Vision prayer, and the Angel Moroni. He sings, “You used to baptize me when I wasn’t ready!” before physically and emotionally spitting on the image of Mormonism’s first prophet.

In perhaps the most shocking moment, at least for current and former LDS members, Tyler boards an elevator and appears to make the Tokens of The Priesthood, which are sacred “handshakes” used by LDS members in the Temple ceremony in order to pass through “The Veil.”

Inside the elevator, as what looks to be scripture pages blow around him, Tyler continues to sing, “You keep throwing me out… one man’s trash is another man’s treasure.”

Finally, he paints his face with a scarlet “X,” which could be taken to be a reference to being “ex’d,” or “excommunicated.”

Regardless of the viewer’s own faith or faith history, it’s a beautiful and haunting song. And knowing something of Tyler’s own journey though the faith makes it all the more powerful. It is destined to become a stunning anthem for former Mormons and music aficionados everywhere.

April 30, 2016
Another Day, Another Bangladeshi Man Murdered for Supposedly Insulting Islam
Next Post