When a superior civilization from a faraway planet finally makes it to Earth, I’m guessing that this will be on their Top-5 WTF list.

In countries like Malawi, Mozambique, and Tanzania, albinos are routinely hunted and killed. For reasons that don’t make the slightest sense, their paleness, the result of a skin-pigment deficiency, makes their severed body parts desirable for practitioners of witchcraft. White people, despite their often very similar skin tone, have little to fear. Albinos, sadly, have everything to fear — even extinction, says the U.N. 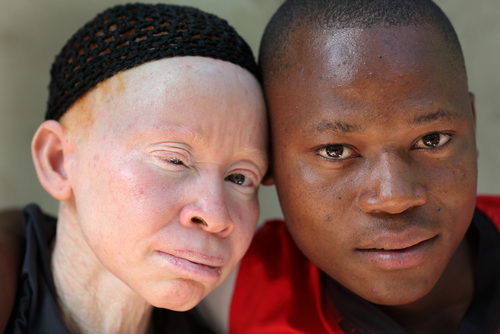 Malawi’s estimated 10,000 albinos face “extinction” if they continue to be murdered for their body parts for use in witchcraft, a UN expert has warned. Ikponwosa Ero said that the situation “constitutes an emergency, a crisis disturbing in its proportions.”

Hold on. The extinction claim is perhaps overdramatic. The BBC says Malawi law enforcement has recorded “65 attacks, abductions, and murders of albinos” since the end of 2014. If the number of killings over 15 months was a “generous” 50 (which would mean that the annual number of albino murder victims is 40), it’ll take 250 years to wipe out a population of 10,000 — and that’s assuming that no more albino children are born in the meantime.

Admittedly, that’s a cold way to reframe the problem. Despite the U.N.’s iffy-seeming numbers, I take nothing away from the horror of this seriously fucked-up situation.

[Ero’s] call came after two men received a 17-year jail term for murdering a 21-year-old woman with albinism. … Albinos [are] targeted because of beliefs that their body parts “can increase wealth, make businesses prosper, or facilitate employment,” said Ms. Ero, the UN human rights council’s expert on albinism. “Even in death, they do not rest in peace as their remains are robbed from graveyards,” she added.

Even children as young as two and three aren’t safe from albino hunters.

An article at discovery.com says that these kinds of killings are particularly brutal,

… with knives and machetes used to cut and hack off limbs, breasts, and other body parts from their living victims. According to the United Nations, albino body parts can sell for around $600 (or about what the average person earns in one year) in Tanzania.

Contrary to popular belief, superstition doesn’t just mean that people are a little eccentric in their beliefs about metaphysical matters. Sadly, and horrifically, superstition kills.