Near Chicago, Another Religious Object Weeps (Snake) Oil, and the Faithful Come Flocking

Haven’t we been here before? Time and again, in fact?

A bizarrely uncritical news article in the Chicago Tribune relays that an icon in a Greek Orthodox church in Homer Glen, 20 miles southwest of the Windy City, is believed to have been “weeping” or “sweating” oil since last summer. 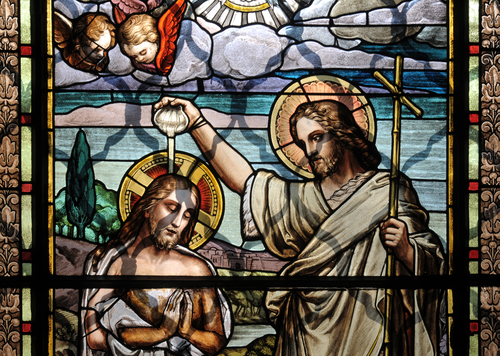 Thousands across the Chicago area are flocking to a southwest suburban parish to see what they believe to be a… miracle.

Since July, tiny droplets of fragrant oil have trickled down an icon of St. John the Baptist in front of the altar. … Parishioners believe the oil has healing properties and that its origins are a blessing from God. …

The oil, which parishioners believe to be myrrh, exudes from the icon’s halo, wings, hands and beard.

The last time a U.S. religious institution had a painting that reportedly wept myrrh, founder Samuel A. Greene Jr ended up confessing that the whole thing was a scam. (Then he killed himself amid allegations that he had been sexually abusing boys for three decades.)

But in the case of the church in Homer Glen, let’s not rain on the parishioners’ parade just yet. After all, the mysterious oil droplets are curing the flock of everything from the common cold to cancerous tumors.

Collected every week by a reservoir of cotton at the base of the icon, [parish priest Sotirios] Dimitriou regularly extracts the oil into a pitcher, then saturates cotton balls, which he seals in plastic bags for parishioners to take home and share with their loved ones. So far, he has handed out more than 5,000 samples.

Dimitriou believes that just being around the oil, and touching it as he dips the cotton balls into the liquid, has cleared up his once-debilitating nerve condition. Another beneficiary credits the substance with helping him recuperate quickly after a hip replacement. A third believer says that the sweaty icon’s emissions somehow unclogged a nearly-blocked artery; a fourth claims, implausibly, that the oil made a cancer growth disappear.

The church, delighted with the extra traffic and donations, is doing nothing to get to the bottom of the so-called mystery. It’s the Lord at work, and that’s that.

The only outsider (I use the word loosely) quoted in the Tribune piece is James Skedros, dean of Holy Cross Greek Orthodox School of Theology in Brookline, Mass.

There is no formal process in the Orthodox church of authenticating such incidents as miracles, he said, but they are believed to hold significance. … Orthodox Christians believe that matter can be a conveyor of sanctity.

The Trib reporter, in her one attempt at basic skepticism, then asks him, “Could the phenomenon be attributed to a reaction to the church’s environment?” And whaddayaknow:

Of course, Skedros said. But why go there? What bishop wants to question the congregation, discredit a priest or doubt God?

He might as well have added, “And why walk away from perfectly good money?”

Consider the example of a Catholic church in Thornton, California. In 1981, a ceramic statue of the virgin Mary in the Mater Ecclesiae Mission Church began to weep and, according to some, to move as well.

Soon the church had to be kept open seven days a week to accommodate the hordes of pilgrims who flocked to the site. According to one magazine article, “money poured in, enabling the parish to buy a new roof, air conditioning, and such frills as a wrought-iron fence to protect the statue.”

At last, after hundreds if not thousands of believers had been so fleeced, the Stockton diocese decided to conduct what looks to be a honest (if unacceptably belated) investigation. The commission charged with assessing the evidence concluded that “human agency was responsible for the statue seeming to come to life.” That’s a nice way of saying that someone in the church practiced outright and prolonged deceit. No word on whether any of the church-scam victims got their money back. The story is recounted in Joe Nickell‘s Looking for a Miracle: Weeping Icons, Relics, Stigmata, Visions & Healing Cures.

Is it possible that Chicagoland’s Father Dimitriou, or another person in the church, is tempted by the lure of more worshipers and a pile of extra cash? To remove such suspicions, the parish would do well to allow — better yet, to request — an independent investigation.

P.S.: A quick Google search turns up thousands of accounts of “weeping” or “sweating” religious artifacts (for a primer, start here and continue here and here). The field is rife with hoaxers, and fertile ground for tireless debunkers like the wonderful Sanal Edamaruku. I’d love to see someone much like him — say, a sleuth from the Committee for Skeptical Inquiry — spend some quality time with the miracle icon in Homer Glen. It’s very likely we’ll hear that the “weeping” phenomenon is caused by condensation, or capillary action, or some other well-understood, non-supernatural process.

P.P.S.: The house of worship in question is called the Assumption Greek Orthodox Church. It sure does the first word in its name proud.

April 30, 2016 Kenyan Religious Leaders Are Furious That the Government Legally Recognized an Atheist Group
Browse Our Archives
What Are Your Thoughts?leave a comment