***Update***: According to some sources, the Attorney General has suspended the atheist group. However, Harrison Mumia says he doesn’t know if it’s official:

… in response to the orders, Harrison Mumia of the Atheist Society of Kenya, said they had not been notified of the de-registration.

“There is a procedure the AG has to use to issue a formal communication to us. Until we get that, we are proceeding with our plans,” Mumia told the Star.

Earlier this month, we learned that Harrison Mumia and his group Atheists in Kenya was finally approved as a registered organization in the country (kind of like applying for U.S. non-profit status). He had been rejected earlier because such a recognition, he was told by a government official, would disturb the peace in the country. 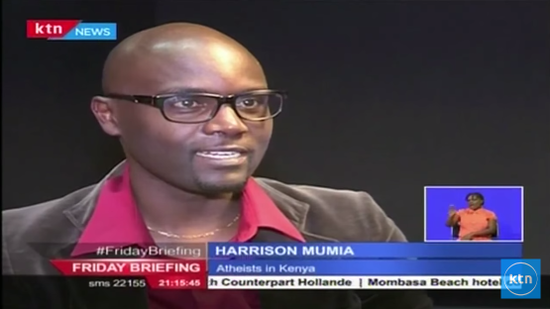 Now, however, Christians are urging the government to reverse its decision.

Kenya National Congress of Pentecostal Churches and Ministries said it is “abominable and unconstitutional” for the society to be registered.

During a press conference yesterday, congress vice chair Stephen Ndichu said: “As people who believe in God, we register our disgust to the [Attorney General] for the way he has casually and in utter contempt been handling religious issues.”

“He has now touched the nerve of every person of faith by registering a society that denies the existence of God.”

How’s that for religious exceptionalism? It’s a travesty, they say, for people who disagree with them to be recognized by the government as existing!

It’s not just Christians complaining, either:

“We are a people of faith. We are now opening up to ideas that promote immorality through erosion of our values anchored on religion,” he said.

Isn’t it lovely how Christians and Muslims, who are fighting in other parts of the world, can unite in solidarity against a common enemy…?

Keep in mind that the atheist group hasn’t (and won’t) call for the de-registration of religious groups. Mumia and his colleagues aren’t asking for special treatment. They just want legal recognition as a group.

As for the Constitutional issue, it’s true that Kenya’s founding document says right up front that the people of Kenya acknowledge “the supremacy of the Almighty God of all creation.”

However, the Constitution also says:

Every person has the right to freedom of conscience, religion, thought, belief and opinion.

This is how religious groups win: Not by making the best arguments for their beliefs, but by suppressing those who dare challenge their authority.

Hopefully, Kenya’s Attorney General Githu Muigai stands behind the atheist group and its members’ right to believe whatever the hell they want.

April 30, 2016
Near Chicago, Another Religious Object Weeps (Snake) Oil, and the Faithful Come Flocking
Next Post

April 30, 2016 Another Day, Another Bangladeshi Man Murdered for Supposedly Insulting Islam
Browse Our Archives
What Are Your Thoughts?leave a comment