A self-proclaimed “prophet,” South Africa’s Pastor Mostsoeneng Mboro, recently announced that he had ascended to Heaven on Easter Sunday, and he made sure to take pictures with his Samsung Galaxy S5 while he was up there just to silence any doubters. 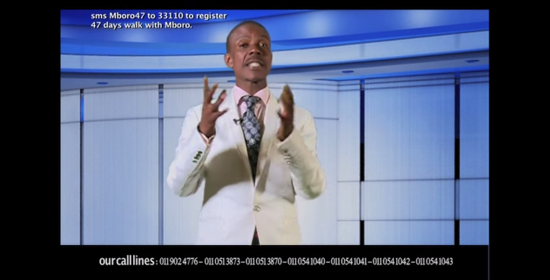 Having no takers and under possible extortion charges, he quickly promised to post the images on Facebook for free.

But that’s not happening now because — wait for it — his phone was stolen!

… he said he couldn’t post his selfies because his phone got stolen at a car wash in Katlehong.

What bad luck! Mboro finally had the opportunity to prove God’s existence once and for all — offering the evidence that skeptics are always looking for — and he didn’t bother making backup copies of his pictures, or emailing them to anybody, or safeguarding his phone, or posting them publicly anywhere and everywhere upon his arrival back on Earth.

I guess everyone learned their lesson: Next time the pastor asks for money, give it to him immediately.

This is the same pastor, by the way, who made international news five years ago because he was sexually abusing members of his own church — all in the name of Jesus, of course.

(Image via YouTube. Thanks to Kyle for the link)

April 29, 2016
Here Are Aerial Images of Ken Ham's Ark Under Construction. Notice Anything Un-Biblical?
Next Post

April 29, 2016 Proselytizing High School Teacher Thinks He Got Fired Because He's a Christian
Browse Our Archives
What Are Your Thoughts?leave a comment