Idaho Man Whose License Was Revoked Sues State, Saying He Only Follows the Ten Commandments

Peter Jensen, a man from Athol, Idaho, believes the laws of the state don’t apply to him because he’s a Christian who only accepts Mosaic Law. If it’s not in the Ten Commandments, he doesn’t need to follow it.

Thankfully, the test case for this isn’t that he stoned an adulterer, but that he had his driver’s license suspended for driving without a valid license plate. Now he’s suing the state. 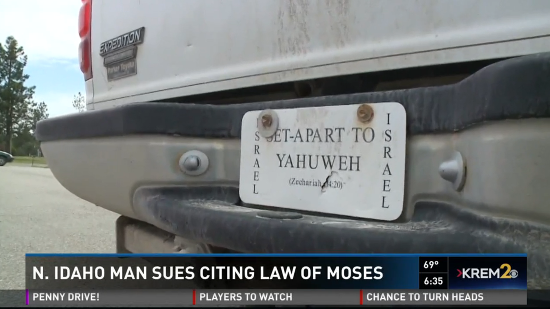 “The main thing I wanted to do is identify myself as being separate from the laws of this nation,” said Jensen.

There is nothing in Mosaic Law about needing a license plate.

“I have a constitutional right to drive freely without restriction, so I shouldn’t have to get a driver’s license, vehicle registration, so forth,” said Jensen.

I can’t imagine how God forgot to tell Moses, “Thou shalt have a registered license plate on your motor vehicle at all times. Whenever someone invents that.” Must have been on the lost tablet where He banned slavery and rape.

Jensen is suing for $5.6 million. Which makes just as much sense as the rest of his lawsuit. But don’t you dare give him cash when he wins.

Jensen wants that money to be paid in gold or silver coins.

No court date has been set yet.

(via Jalopnik. Screenshot via KREM. Thanks to Brian for the link)