A New Type of Cross May Soon Appear on Dewey Hill in Grand Haven, Michigan

Do you remember all the drama that took place since 2014 in Grand Haven, Michigan because of a giant hydraulic cross? The homage to Christianity had been going up several times a year, but local atheists convinced the city council to put an end to the government promotion of religion more than a year ago. Christians spent the next several months fighting back.

The Christian pushback involved a lawsuit, which was dismissed last summer. A second lawsuit was then filed… and also dismissed.

It seemed abundantly clear that the government could not and would not erect this Christian cross again.

But this week, the Grand Haven City Council proposed a new way to promote Christianity… and in the same location, too:

The Grand Haven City Council voted 3-2 to add a yardarm to the flagpole situated atop the dune. The addition of the horizontal bar on the top portion of the structure is designed to transform the traditional flagpole into what is commonly referred to as a maritime flagpole.

A yardarm to honor the Coast Guard. A structure that looks just like a cross. 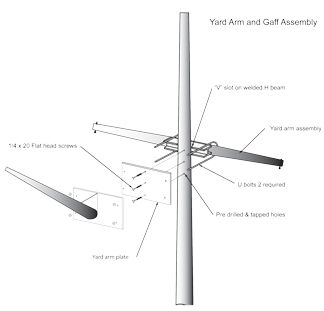 How convenient. They might as well erect a telephone pole and a statue of a lower case T right next door. They’re not technically crosses, but the message is the same: This is a government that supports the Christian religion and no other.

One council member who voted against the motion even argued, “It’s a thinly veiled effort to add a city-owned cross on city-owned property.” He’s absolutely right.

Mitch Kahle was one of the atheists who helped bring down the hydraulic cross in 2014. I reached out to him yesterday to ask what he thought about this new development. What did he make of this story? His response was blunt:

Our newspaper is desperate?

That’s it. To him, this is a non-story. Presumably, that means he’s not about to sue the City Council over this. That’s fine. To me, this story is less about the legal implications of the yardarm and more about the amazing lengths some people will go to in order to promote their religion through the government.

(Thanks to Randy for the link. Portions of this article were published earlier)

April 29, 2016
Methodist Minister: Beheader Was Possessed By Demons, But After a Remote Exorcism He's Totally Fine
Next Post

April 29, 2016 Turkish Journalists, Sentenced For Blasphemy, Get Two Years For Reprinting Charlie Hebdo Cover
Browse Our Archives
What Are Your Thoughts?leave a comment