What does the word “Crusade” mean to you? I suspect if you ask people today, many of the explanations would reference groups like ISIS, hell-bent on spreading their faith even if there’s a human cost to it.

While the word had more positive connotations, at least in a Christian sense, several decades ago — think Billy Graham — it no longer does. That’s in large part why Campus Crusade for Christ changed its name to Cru in 2011.

And it’s the same reason the Denver Christian Schools have now decided, after 65 years, to change their mascot from the “Crusaders” to something less… threatening. 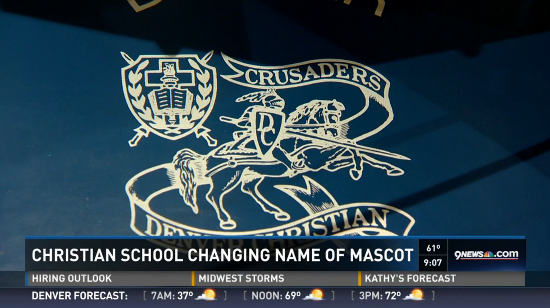 “In our mission, in light of the command to love our neighbors as ourselves, the crusader was an inconsistent, inappropriate symbol for that mission,” school CEO Todd Lanting said.

So in November, the school asked members of its community, including students, parents and alumni for ideas for a new name for a mascot.

They’ve narrowed the list down to two: Thunder and Trailblazers. The final votes from the community are being tallied and the school will announce its new name soon.

All of that sounds perfectly reasonable. So what’s the problem?

Critics are pushing back against what they assume is political correctness run amok:

They have formed a Facebook group with more than 300 members. They claim the school did not give them a voice in the name change.

They also say there is nothing wrong with the name Crusader, as it has been part of the school’s history for 65 years.

It’s the same old Christian argument we’ve heard many times before. It’s refreshing that it’s being used on other Christians, but it’s still as silly as ever. Just because something is a “tradition” doesn’t mean it has to stay that way. Bad traditions need to end, and calling yourselves religious “Crusaders” is as horrible an idea as choosing a name that represents some oppressed minority.

Hopefully, Lanting will do what everyone else does when Christians begin to whine about something perfectly sensible — and completely ignore it.

(Screenshot via 9news. Thanks to Matt for the link)

April 28, 2016
Ray Comfort: I'll Also Be at the Reason Rally... to Convert All the Atheists
Next Post

April 28, 2016 Dad Tells Daughter He'll Break Her Future Boyfriend's Legs and She's Going to Work For Jesus
Browse Our Archives
What Are Your Thoughts?leave a comment