Michael Voris, producer of the conservative Christian website “Church Militant,” recently shared a video explaining that not only did God cure his *homosexual tendencies*, but that it happened through a pretty gruesome way: God gave his mother cancer, which eventually killed her, and it turned him straight. 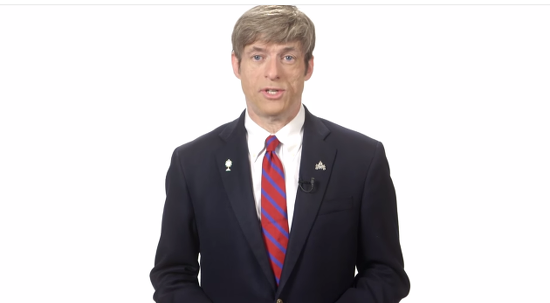 In the video, Voris explains that he’s grateful God gave his mother cancer, as it was a wake-up call for him to return to the Catholic Church after he spent his twenties and thirties living in “mortal sin”:

[Voris] denies being gay. He does say, however, that “… most of my thirties, confused about my own sexuality, I lived a life of live-in relationships with homosexual men.” And he is aware of how that looks. “From the outside, I lived the lifestyle and contributed to the scandal in addition to the sexual sins. On the inside, I was deeply conflicted about all of it.”

Voris says that he’s now horrified with the life he once lived, but that he’s certain it was his mother’s demise that brought him back to heterosexuality. His description of what happened is really creepy, too.

“As a last resort, she prayed to be given whatever suffering so that I would be granted sufficient grace to revert.” And, shortly after her prayers, she received an early diagnosis of stomach cancer, which killed her a few years later. It was while watching his mother suffer through her last year of life that Voris began to change his life, but it was her death that made the miracle happen.

“I pledged at her coffin that I would change. I said, ‘Mom, what you went through for me, you will not have gone through in vain.’ I returned fully and completely to the faith.” Two years later, he says, he founded the apostolate that he is now trying to save.

Voris has more to say, however, about how wonderful it was that his mother got cancer. “I was thrilled, over the top with gratitude, with what God had done for me through my mom and her suffering.”

Voris also issued an apology to anyone who was “wounded” by his lies about his past experiences and says the experience has proven that God can “cure” anything.