Christian Wife Asks For Prayers For Her Newly Atheist Husband. Can This Marriage Be Saved? April 28, 2016 Terry Firma

Christian Wife Asks For Prayers For Her Newly Atheist Husband. Can This Marriage Be Saved?

When Redditor LolHSV got married, he and his wife were both about “56 percent religious,” he says. Since then, his religiosity has sunk to the point where he now considers himself an atheist. Hers, in response, has increased to the point where she temporarily left her godless husband and stayed with her religious parents. She didn’t return until LolHSV threw Genesis 2:24 at her:

Leave thy father and mother and cleave unto thy wife, and the two shall become one flesh.

Clever move, but now what? The religious strife between them hasn’t abated. Yesterday, his spouse submitted a prayer request at church. This one: 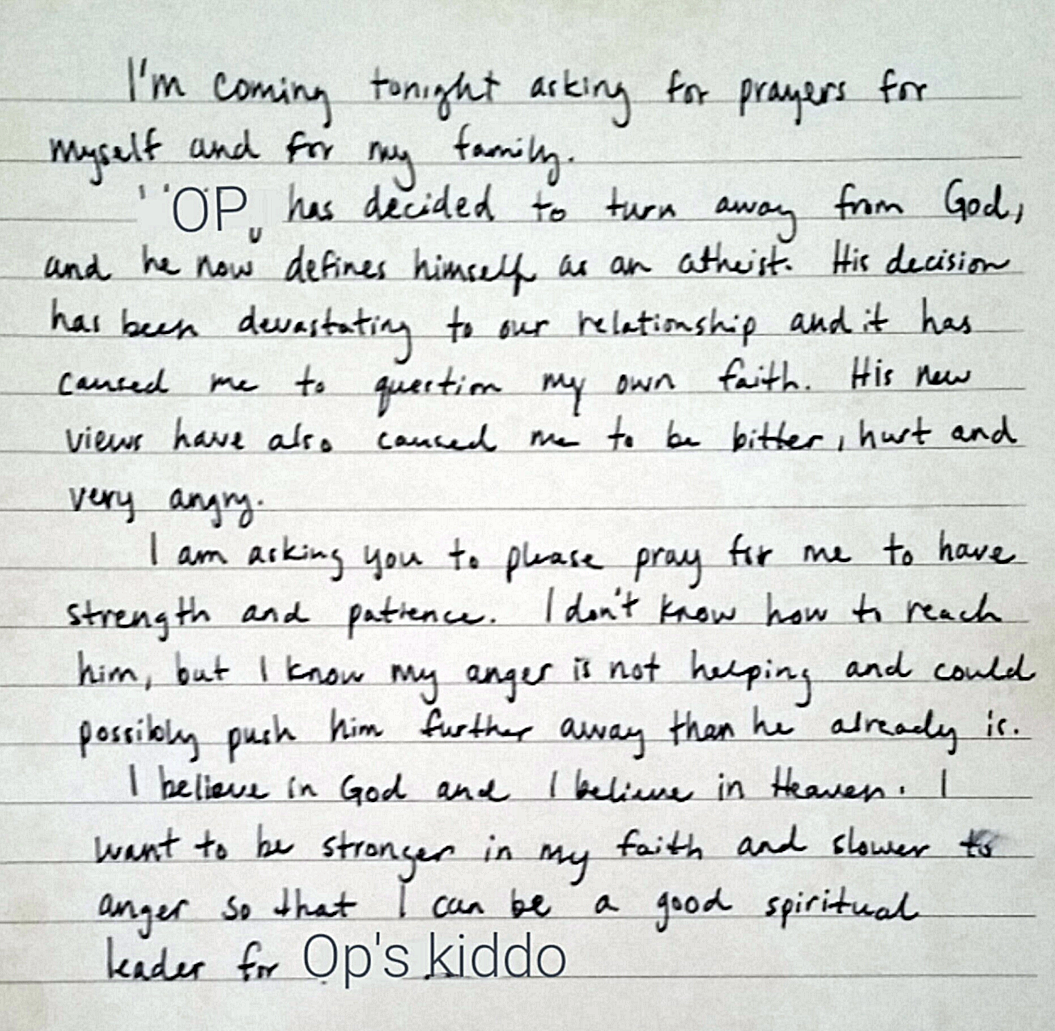 I’m coming tonight asking for prayers for myself and for my family.

[Original Poster] has decided to turn away from God, and he now defines himself as an atheist. His decision has been devastating to our relationship and it has caused me to question my own faith. His new views have also caused me to be bitter, hurt and very angry.

I am asking you to please pray for me to have strength and patience. I don’t know how to reach him, but I know my anger is not helping and could possibly push him further away than he already is.

I believe in God and I believe in Heaven. I want to be stronger in my faith and slower to anger so that I can be a good spiritual leader for [Original Poster’s kid].

She says his “decision” (wrong word, probably) to abandon Christianity has been very deleterious to their relationship, and that she is “bitter, hurt and very angry.” His godlessness has even caused her to question her own faith.

I’m inclined to say that that last part is a good thing, but I don’t want to be flippant — two people, if not three (they have a child) are clearly hurting here.

What are marital partners who love each other to do if they are being pulled in different directions spiritually?

I’m especially interested in the question because I’m married to a lifelong Christian myself (a nominal one who I’ve never seen with a Bible, and who doesn’t visit church more than once or twice a year). Me, I’ve always been an atheist, and both of us knew full well what we were getting into. We avoid trouble by essentially not broaching the subject, concentrating instead on topics and values that bind us more than religion can — equality; the promotion of individual freedom; art and creativity; and raising three kids to be polite, kind, self-reliant, and ethical.

Religion isn’t a wedge issue for us, but it’s terribly divisive to scores of unhappy couples. Each of their situations is unique, but I imagine many are struggling with some variation of what LolHSV is going through. What should he and his wife do?

Help a brother out?