The last time we saw Arkansas State Senator Jason Rapert, he had passed a bill to install a Ten Commandments monument on the grounds of the State Capitol and was trying to fundraise for it.

For his latest publicity stunt, he’s denouncing Target’s bathroom policy which allows trans people to use the appropriate bathrooms. And he’s blaming “godless secular humanists” for letting it happen. 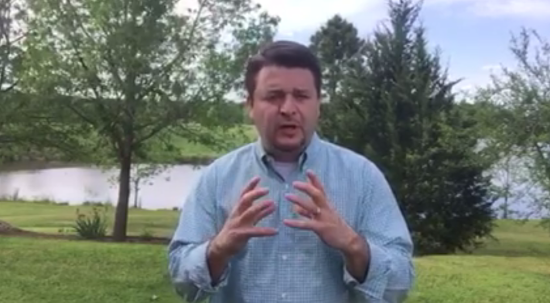 I want to know: What kind of people do you have in your executive office? What kind of people in their right mind, at Target, thinks that’s a good thing? I guarantee you it’s some liberal, secular, godless Humanist who’s got a position in your company, and they made you think, somehow, that less than 5% of the American population can lord over the entire rest of us out here in America.

Target isn’t doing this at the request of atheist executives. They’re doing it because it’s the decent thing to do, because it makes another group of marginalized customers happy to shop there, because (let’s admit) incorporating progressive values in your company means better publicity, and because they know there’s nothing to fear about trans people using the bathroom that aligns with their sexual identity.

P.S.: Rapert is also using his official Senate Facebook page to promote his Christian ministry — something that is surely afoul of the law:

April 28, 2016
The Satanic Temple Weighs in on John Boehner Calling Ted Cruz "Lucifer in the Flesh"
Next Post

April 28, 2016 Ray Comfort: I'll Also Be at the Reason Rally... to Convert All the Atheists
Browse Our Archives
What Are Your Thoughts?leave a comment