I don’t know a better alternative to democracy, but democracy sure can be scary. If, hypothetically, we let Americans vote in a referendum on whether they want to keep the already-porous wall between state and church intact, I wouldn’t bet that a majority is going to stand up for the First Amendment and its Establishment Clause.

That’s by way of introducing you to Turkey’s parliament speaker Ismail Kahraman, who wants to substitute Turkey’s secular constitution for a religious one. That’s completely at odds with founding father Mustafa Kemal Atatürk‘s vision of a secular republic. But Kahraman’s proposal might not prove to be that unpopular in a country where more than 90 percent of the population is said to identify as Muslim. 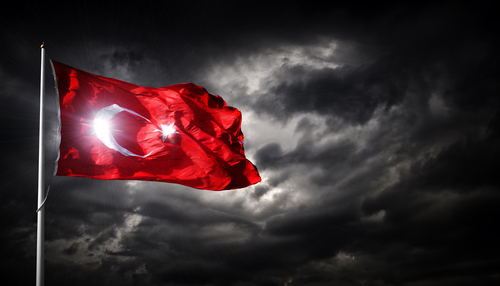 Speaker Ismail Kahraman, who is drafting the new charter, also said the new constitution should drop references to secularism, while lamenting the fact Allah is not mentioned in the constitution. His comments were met by condemnation from the opposition and a brief street protest on Tuesday. …

President Tayyip Erdoğan and the ruling Justice and Development Party (AKP) have tried to restore the role of religion to public life.

So far, though, Erdoğan claims he is not on board with the speaker’s desired changes.

Defending Turkey’s secularism, he said: “My views are known on this … The reality is that the state should have an equal distance from all religious faiths.” Prime Minister Ahmet Davutoglu has assured the parliament Turkey’s new constitution will include the principle of secularism.

(Image via Shutterstock. Thanks to Dave for the link)