Ted Cruz Picks Carly Fiorina As His Running Mate… in a Race They’re Both Going to Lose April 27, 2016 Hemant Mehta

Ted Cruz is set to announce that Carly Fiorina will be his running mate — which, let’s face it, only matters in the fantasy election taking place in his head. 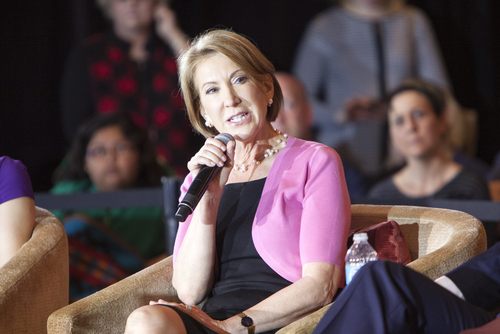 While the move is designed to get attention after his devastating losses last night and give him some momentum heading into the California primary, it’s hard to see how it’ll improve his standing among Republicans. Adding a female version of yourself to the ticket is hardly the way to expand your base.

Fiorina is best known to voters as the person as the candidate who saw “a fully formed fetus on the table, its heart beating, its legs kicking” in the anti-Planned Parenthood videos… even though that footage doesn’t exist. In any case, when it comes to preventing women from having access to abortions, Cruz already has that ground covered.

It’s also worth noting that Fiorina said in an interview earlier this year that Cruz, like every typical politician, would say “whatever he needs to say to get elected.” Today, by selecting her as his running mate, he’s proving her right.

He’s not interested in governing. He’s not interesting in having someone at his side who will challenge him. He’s just hoping to pick up a few more votes — and he can’t even do that right since Fiorina’s addition doesn’t bring anything new to the ticket. I doubt many Republican women are going to suddenly flock to their camp — and I would hope women who are independents and Democrats know better than to support the most anti-feminist ticket in modern history.

If nothing else, at least Fiorina will make some history, becoming the first woman in U.S. politics to lose a presidential race twice in the same cycle.

April 27, 2016 It's About To Be Legal For Tennessee Counselors to Deny Mental Health Services Based On Religion
Browse Our Archives
What Are Your Thoughts?leave a comment