The mighty have fallen: Dennis Hastert is going to prison for a year and three months, in a case that involves his sexual abuse of at least four boys as young as 14. 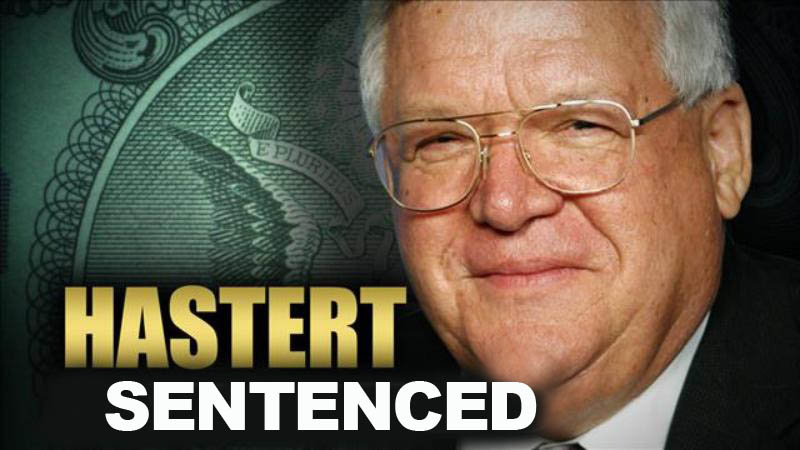 J. Dennis Hastert, once among this nation’s most powerful politicians, was sentenced to 15 months in prison on Wednesday for illegally structuring bank transactions in an effort to cover up his sexual abuse of young members of a wrestling team he coached decades ago.

He was neither charged with nor sentenced for sexual abuse; the statute of limitations on the sex crimes had run out. Nonetheless,

“The defendant is a serial child molester,” said Judge Thomas M. Durkin of Federal District Court in a tough rebuke of the former speaker before issuing his sentence. The judge added, “Nothing is more stunning than having ‘serial child molester’ and ‘speaker of the House’ in the same sentence.”

Hastert appeared in court with a wheelchair and a walker, after suffering a stroke a while back and coming down with a bloodstream infection and a spinal infection. The judge allowed that the defendant would probably be sent to a prison hospital, saying, “This is not meant to be a death sentence.”

Various prominent supporters, including Tom DeLay and four other former GOP Congressmen, had written letters to the court requesting clemency or leniency for the serial buggerer of underage boys. DeLay did so in part on account of Hastert being a man of God.

Another letter was submitted by Hastert’s brother, Dave,

… [who] wrote that he feared Mr. Hastert would fall into depression, given his circumstances and the physical ailments that have left him in a wheelchair. “If it were me, I’d be wheeling that chair to the highway, and waiting for a semi.”

In court, Hastert apologized for his crimes and his financial misbehavior.

“The thing I want to do today is say I’m sorry.”

Too little, too late.

The judge didn’t go particularly soft on Hastert, giving him two and a half times the six-month prison sentence that the prosecutorial team had signaled they could get on board with. Hastert also has to pay a fine of $250,000.

In an aside, the New York Times reminds us of the circumstances under which Hastert became Speaker of the House.

[H]e had a reputation for appearing down-to-earth and steady — with little hint of scandal. Mr. Hastert, who was first elected to Congress in 1986, found himself catapulted to speaker in 1999, in part because he seemed to be a safe, agreeable option: The Republicans’ first choice, Robert L. Livingston of Louisiana, stepped away from the post even before he took it, acknowledging adulterous affairs in his past.

Prosecutors noted that Hastert’s life is “marred by stunning hypocrisy.”

(Image via U.S. Congress via News8Now)