North Carolina State Senator Buck Newton, a sponsor of the anti-trans bathroom bill that has ruined the state’s reputation and a candidate for attorney general, made a remarkable comment on Monday during a campaign rally: 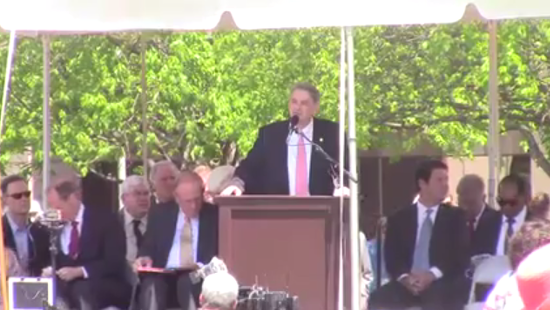 “Go home, tell your friends and family who had to work today what this is all about and how hard we must fight to keep our state straight,” he said to applause.

There are two ways to interpret that comment. The generous way is that he meant we have to keep our state on the right track.

But when it’s an anti-LGBT bigot doing the talking, saying the words at the end of a long anti-LGBT diatribe, it’s hard to believe that’s what he really meant. What you heard was a dog whistle to his supporters, and Democrats were quick to pounce on that:

“One of the Republican sponsors of HB 2 just admitted the real purpose of the law: to make North Carolina unwelcoming to (lesbian, gay, bisexual and transgender) people,” party spokesman Dave Miranda said in a statement.

Under this interpretation, Newton seems to think that HB 2 and laws like it would make life so difficult for LGBT people that they’d eventually move out. But they’re not going anywhere. They’ll do everything in their power to make sure people like Newton never get elected to public office. And if it doesn’t work this election cycle, they’ll try again next time. It’s that sort of pressure that transformed this country when it came to marriage equality, and it’s that sort of pressure that’ll turn the tide this time, too. Already, Democrats have filed a bill to repeal HB 2 and, given the public outcry, there may be good reason for Republicans to support it.

On Facebook yesterday, Newton claimed that liberals were twisting his words:

Liberals will never stop until we’re silent. Today, liberals from all over the country are twisting my words from yesterday’s HB2 rally to stir up their voter base, raise money for my opponent, and distract from the main issue of The Bathroom Protection Act. I didn’t intend anything malicious or discriminatory, but they’ll never admit that because they are determined to silence conservatives. Rest assured, I won’t back down to their hateful attacks or their far-left agenda that endangers women and children in the bathroom.

Help me win this race, so I can defend our values…

Suppose everyone else is wrong and this really was a big misinterpretation. It’s hard to believe the guy who sponsored a malicious and discriminatory bill didn’t intend to say something just as atrocious. He hasn’t earned the benefit of the doubt.

As it stands, Newton and his opponent Josh Stein are neck and neck in the polls.

April 27, 2016
It's About To Be Legal For Tennessee Counselors to Deny Mental Health Services Based On Religion
Next Post