Want to Trick People Into Believing You’re a Doctor? Then Buy a “Pastoral Medicine” Degree

Want an easy way to trick people? Just put random letters after your name as if you have an advanced degree and see how many people fall for it.

That’s what the Pastoral Medical Association seems to be doing. Unlike getting an MD or RN after your name, you don’t have to hold a specialized grad school degree to obtain your PSC.D or D.PSc degree (for pastoral care). You just have to pay them some cash and agree with their principles. 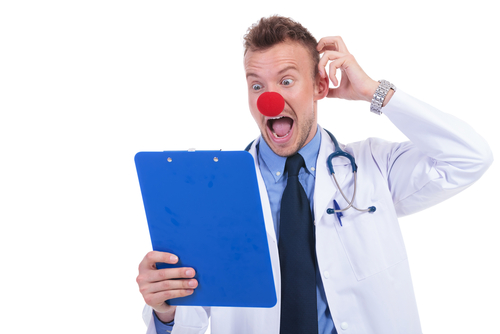 And if you acquire those credentials, what does it mean?

Basically nothing. But some patients will still take your advice seriously. And that’s the problem.

That includes patients like 60-year-old Mark Sarchioto, who lives just outside Dallas. Sarchioto has crippling neuropathy and has been searching for a treatment for decades. One leg is numb, and as he shifts from his walker to the couch, he holds out his left hand.

“It feels like somebody is puncturing it with needles,” he says. “Right now it’s cold and I can’t keep it warm.”

That man needs to see a real doctor. Instead, he went to see Karl Jawhari, D.PSc.

“We’ve seen people with an array of issues: thyroid issues, diabetes, blood pressure, cholesterol,” Jawhari says. “We work with a lot of people to reduce their weight and so forth and we’ve had great success with that.”

I have just as much credibility to help people deal with those issues as he does.

NPR reports that Jawhari has been in trouble with both the Texas Board of Chiropractic Examiners (for deceptive advertising) and the Texas Medical Board (for attempting to treat conditions beyond his training). He says these things are no longer a concern. Take that as you will.

In any case, he has letters after his name, so people see him. Even if it’s legal for him to offer advice, let’s be clear: These are credentials he bought, not earned in any meaningful way. And that somehow poses no moral quandary for the Christian ministry doling these certifications out.

Much as we say with alternative medicine practitioners, let’s hope patients get the care they need and aren’t duped by imitators who have very little of value to offer. It’s no different from so-called ministers who offer faith-healing. It just looks slightly more professional. Which comes in handy when you’re trying to reel in gullible people with large wallets.

April 26, 2016
Christians of America, Here Are Four More Reasons Not To Put "In God We Trust" On Our Currency
Next Post