Ken Ham: Atheists Should Blame Evolution for All the Death and Destruction in the World April 26, 2016 Hemant Mehta

Ken Ham: Atheists Should Blame Evolution for All the Death and Destruction in the World

Creationist Ken Ham is a firm believer that if you say something repeatedly, it magically becomes true. That’s why his his entire anti-evolution argument consists of three words (“Were you there?”) and why his Creation Museum is just the same exhibit replicated many times over — no matter how many people offer a counter-argument, he’s a broken record.

It’s no different online, where he went on a tweetstorm this morning to say that people who accept evolution, if they were consistent, would blame it for all the sin and death and destruction in the world.

If that doesn’t make any sense to you, don’t worry. Maybe it will after he says it for the seventh or eighth time… 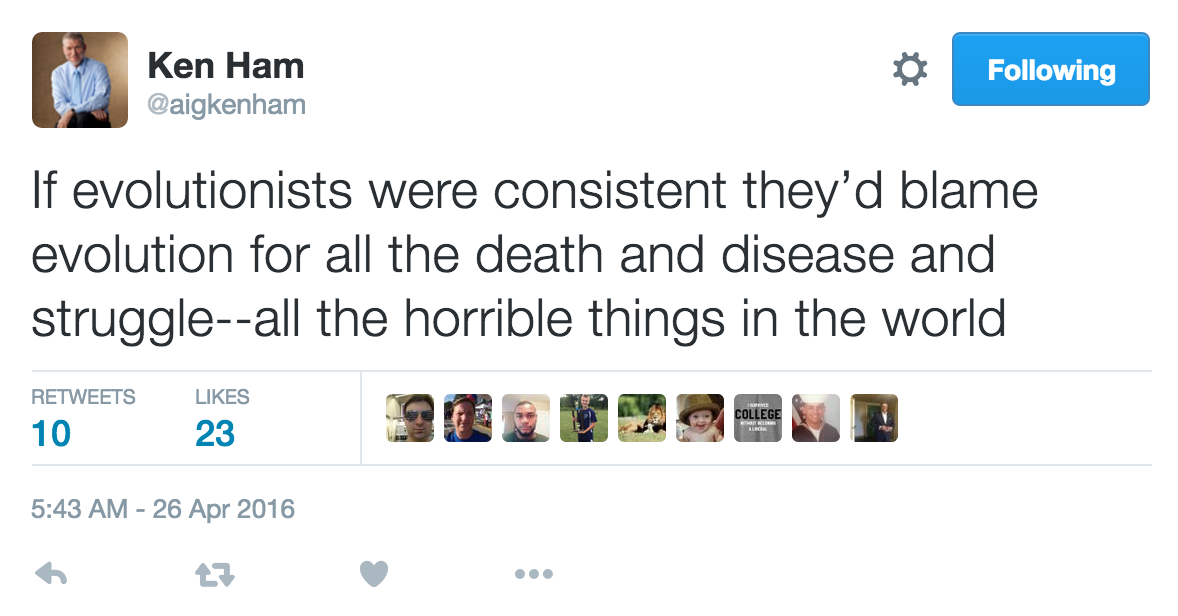 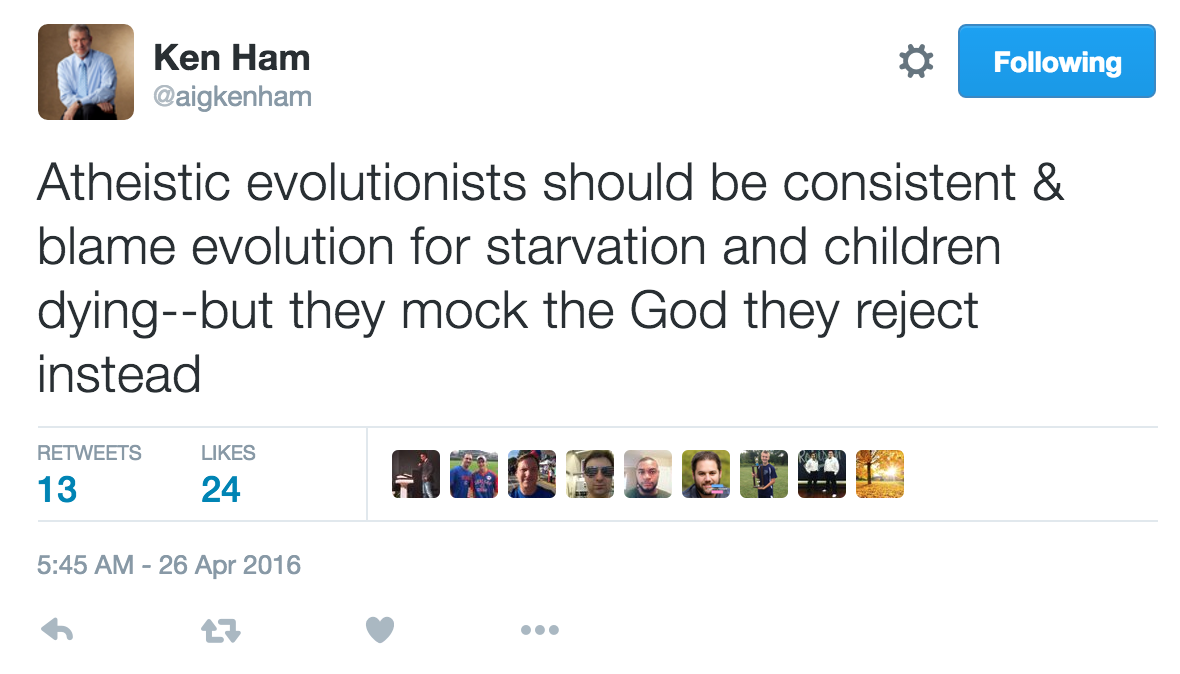 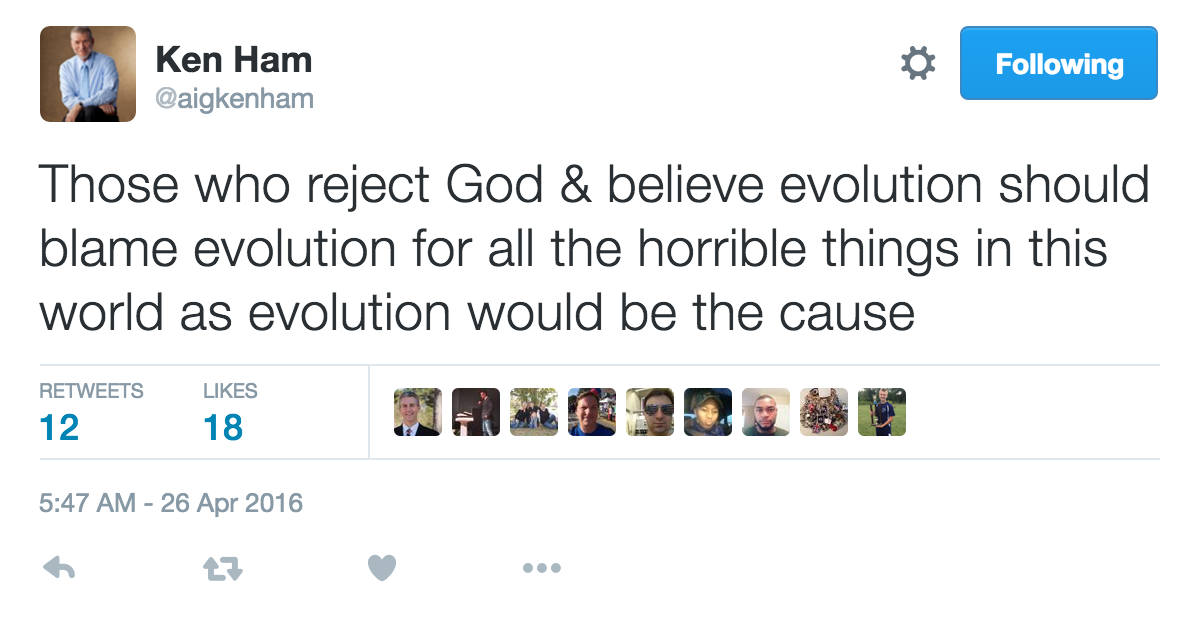 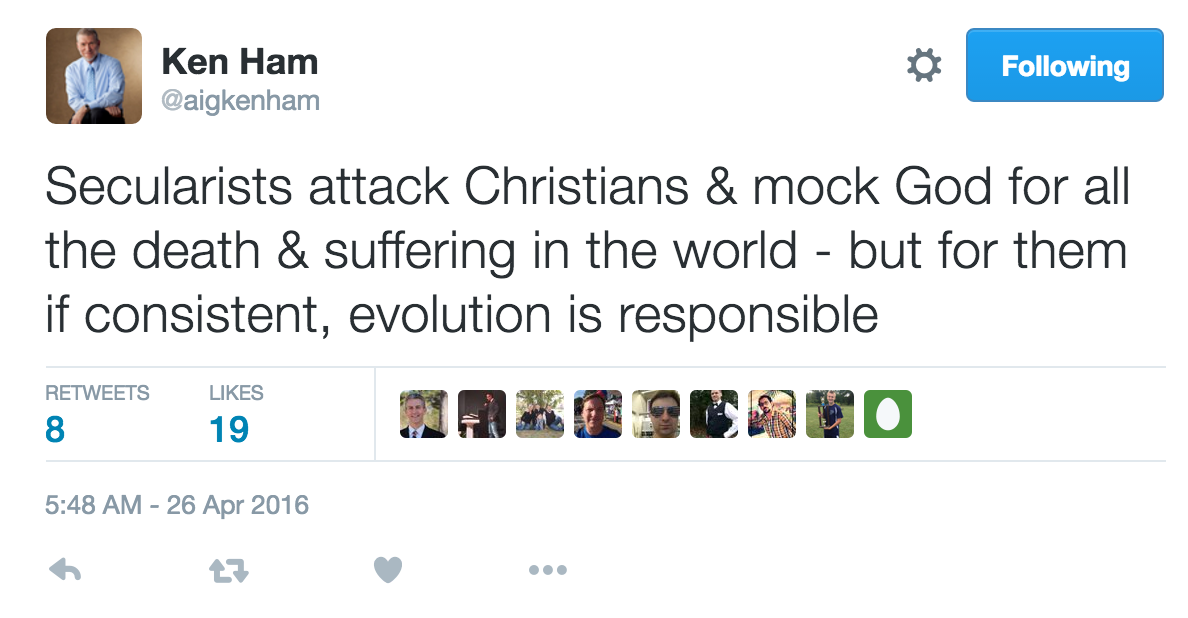 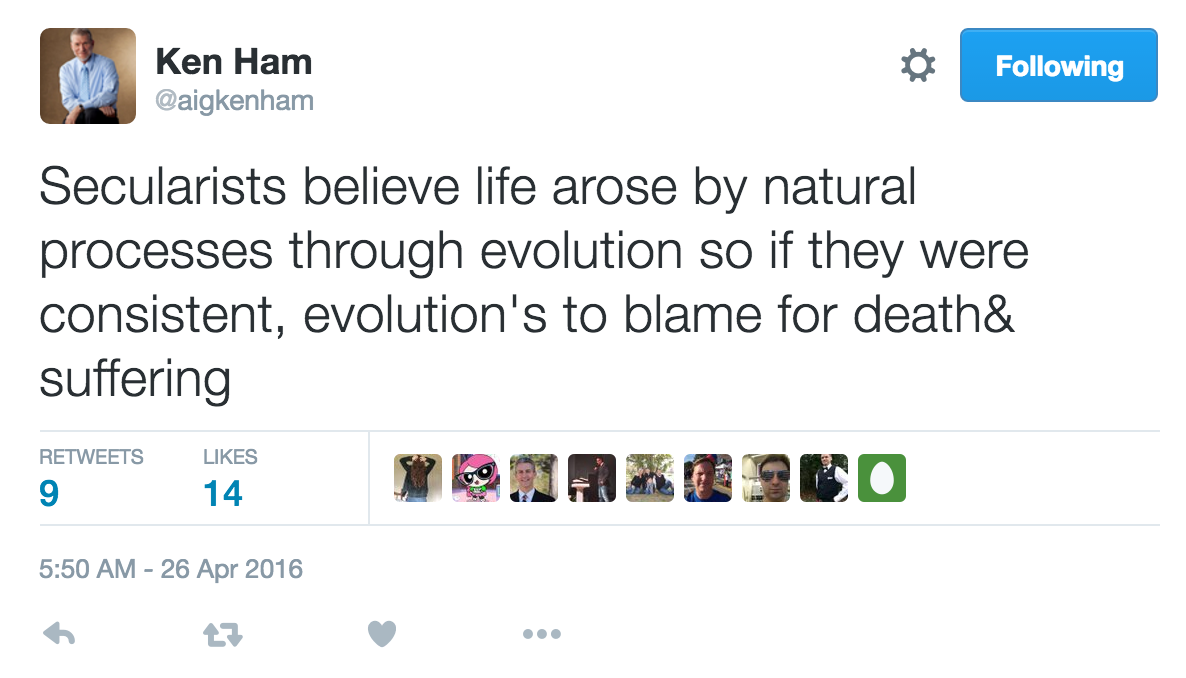 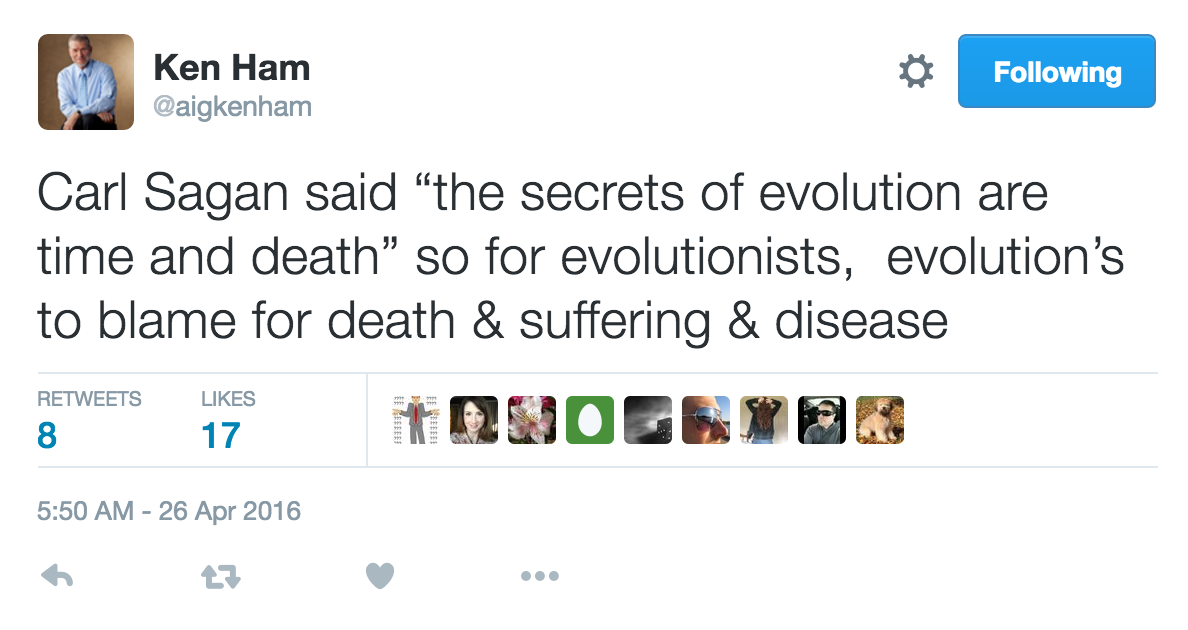 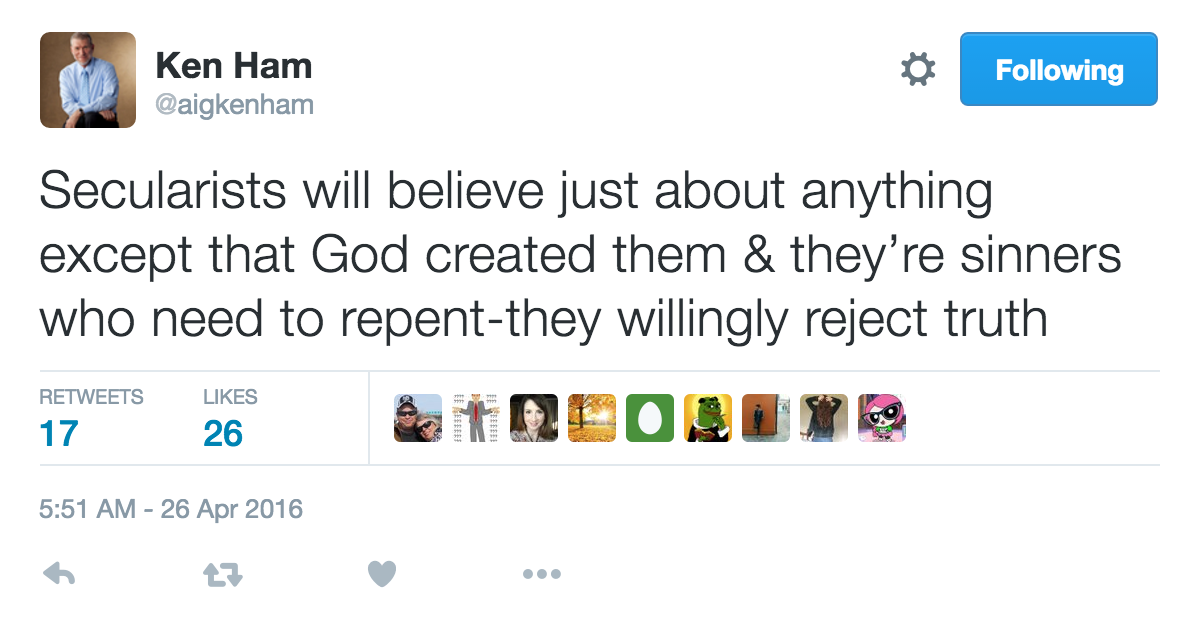 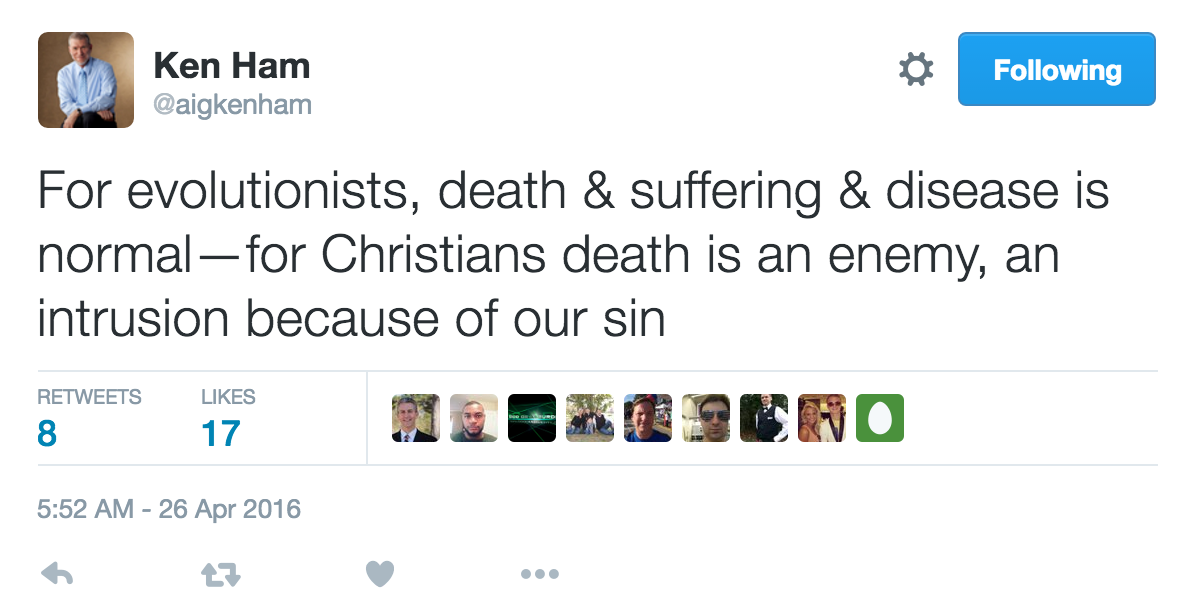 I’m not sure why anyone would blame a natural process for suffering, starvation, and “children dying”… especially when human ingenuity has saved so many children’s lives and countered the effects of starvation (in some places). Furthermore, while I suppose evolution has a role in death and disease, it’s also responsible in the same way for the fact that we’re alive today and that we have bodies that can form natural immunities to those diseases.

By Ham’s logic, we should blame the laws of physics for the Challenger explosion, and gravity for why I tripped this morning, and photosynthesis for Donald Trump. It makes just as much sense.

Maybe the problem is that he’s genuinely convinced a woman eating a forbidden fruit a few thousand years ago set into motion anything bad that happens in our world today.

If you believe that nonsense, you’ll believe anything.