Dutchman Who Built Giant Ark of Noah Will Soon Sail It To Brazil… Sans Animals and on a Barge April 26, 2016 Terry Firma

Johan Huibers is set to give Ken Ham a run for his money.

Four years after Dutch carpenter Johan Huibers completed his fully functional, full-scale replica of Noah’s Ark — a multi-year project that followed the biblical measurements found in Genesis — the vessel is slated to travel 5,000 miles along the Atlantic Ocean from the Netherlands to Brazil. The Ark of Noah Foundation, a group based in Pasadena, California, is raising money to fund the massive trip, which will unfold during the summer of 2016 — a voyage that will be live streamed for the world to see, as the ship sails to the cities of Fortaleza and Rio de Janeiro.

No worries, the United States is next. 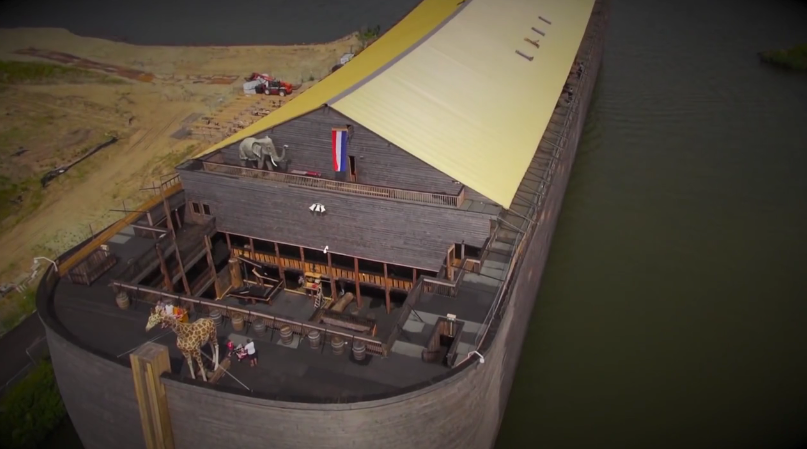 The ship, also known as “Johan’s Ark,” will also visit San Diego, Long Beach, San Francisco and Seattle when it later makes its way to the U.S.

All those journeys, financed with international donations, are especially impressive when you look at the faux-Biblical vessel’s dimensions. Built to hold 5,000 visitors at any one time, it is five stories (75 feet) tall and has five decks. At 410 feet, it’s longer than a soccer field. The ark weighs 2,500 tons, in part because Huibers, in true Old-Testament fashion,

… welded the metal hulls of several old barges together and then [used] Scandinavian pine for the skin.

Missing from the Blaze‘s brief piece about Huibers’ ark is exactly how his creation will make it across the Atlantic. Turns out (insert needle-across-record sound effect here) that the vessel is rudderless and can’t go anywhere under its own — or, apparently, God’s — power. In a video, the enterprising carpenter divulges that

This journey of hope will require the ark to be placed on a barge that will ship us from the Netherlands to Brazil.

In case you’re wondering, no, the ark won’t be chockablock with live animal pairs. Where would Huibers and his helpers put the paying customers? Also, filling the hold with thousands of boy-and-girl critters would be next to impossible given the logistics of keeping visitors and animals safe, feeding the enormous menagerie, and installing and maintaining climate-controlled environments for everything from anacondas to penguins. (Hmm — makes you wonder how Noah did it 4,000 years ago.)

Luckily, that leaves place for two movie theaters and a restaurant. If the eatery serves french fries, Taters of the Lost Ark sure has a nice ring to it.

Once the boat is docked in Brazil, team Huibers hopes to regale visitors with tours of the ark while simultaneously offering them “the story of Noah and teachings from Christ.”

Visitors to the Ark experience a real life journey back in the time of Noah, and learn about God and the historical events of the Great Flood, Creation, and the Judgement in the Old Testament. The Ark is an interactive, informative, cultural Biblical museum and event center. Noah’s Ark provides a Judeo-Christian Bible based experience for young and old.

Special Interest Groups Will be Invited for Free Through your Support, such as Orphans and Underprivileged Families.

I suppose it would be churlish to point out that the millions of dollars spent on the ark project might have benefited the underprivileged in more practical ways; so instead, we’ll just wish the ark, and the barge on which it will rest, bon voyage — and of course, Godspeed.

April 26, 2016 Christians of America, Here Are Four More Reasons Not To Put "In God We Trust" On Our Currency
"” Which raises a rather important question: What’s the point of this?No, the important question ..."
adhoc Want Chick-fil-A on Sunday? This Satan-Infused ..."
"Yeah...it's gonna be hard to corroborate this late in the game....AND there are all those ..."
evodevo Pastor Found Liable for Child Sexual ..."
"It's called "projection" and it's evidently endemic among right winger nutjobs and religious righty types..."
evodevo Pastor Found Liable for Child Sexual ..."
"So show them by...giving them money to buy their products when they are open, keeping ..."
mamiyaRZ67 Want Chick-fil-A on Sunday? This Satan-Infused ..."
Browse Our Archives
What Are Your Thoughts?leave a comment