Mormon Leader at BYU Graduation: “Disconnect Immediately” from “Those Who Have Lost Their Faith” April 23, 2016 Hemant Mehta

Mormon Leader at BYU Graduation: “Disconnect Immediately” from “Those Who Have Lost Their Faith”

Elder L. Whitney Clayton, a leader in the Church’s Quorums of the Seventy, gave the main commencement speech. In addition to making the no-porn comment, he made this incredible remark: 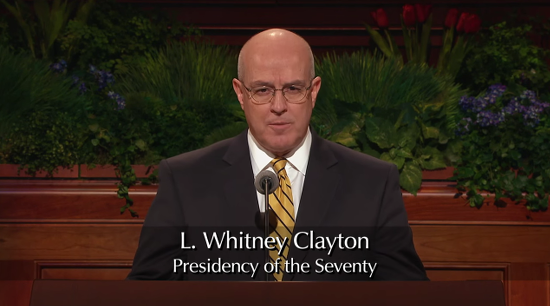 The faithless often promote themselves as the wise who can rescue the rest of us from our naiveté. One does not need to listen to assertive apostates for long to see the parallels between them and the Corihors and Nehors and Sharoms of The Book of Mormon. We should disconnect immediately and completely from listening to the proselytizing efforts of those who have lost their faith, and instead reconnect promptly with the holy spirit. The adversary sees spiritual apathy and half-hearted obedience as opportunities to encircle us with his chains and bind us, and he hopes to destroy us. We escape his chains as we voluntarily chose to bind ourselves instead to God.

To put it another way, after spending several years in college, after being exposed to different perspectives, and after all that preparation to head out into the Real World, these graduates were told by their commencement speaker to cut themselves off from people who dared to challenge them.

Someone more confident in his beliefs could easily have said, “We’ve prepared you well at BYU. So if anyone challenges your faith, we hope you’ll challenge them right back.”

Instead, Clayton’s strategy for dealing with religious dissenters amounts to “RUN AWAY FAST!” That’s some Scientology level shit right there. It’s not just bad advice to college students, it gives away the weakness of Mormon beliefs in the face of criticism.

The only good thing to come from that speech would be if some of those students now graduating from BYU finally have reason to leave the Church for good.