There are very good reasons to adopt children, starting with the fact that there are more than 100,000 kids in the U.S. alone who are in need of a home. That number skyrockets when you take a global perspective.

I’ve got a lot of respect for folks willing to open their homes and hearts to these children. It’s not easy or cheap or simple. I have cousins who were adopted from India and Ethiopia, and I watched my family navigate what was a very long and complicated process in order to bring them home. I’m incredibly grateful they did. My cousins are, objectively, pretty awesome.

But if there’s one thing I learned from watching our family grow through adoption, it’s that it’s so important to approach that process with humility and thoughtfulness. Unfortunately, that seems to be a lesson others still need to learn. Case in point? Aaron Halbert and his wife.

In a stunningly tone-deaf and self-congratulatory essay for the Washington Post, Halbert makes his case for why his family picture is “a little hint of Heaven” here on Earth. His primary argument? He and his white evangelical wife have five children of color. 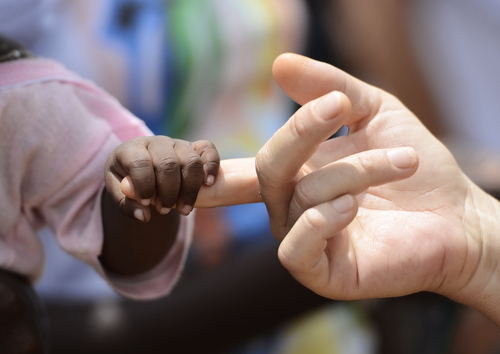 The hubris starts early. See, the Halberts chose to adopt because they felt it was a spiritual calling:

We see protection of children not as charity, nor as part of a political agenda, but as something near to the heart of God. Because every human life bears his image, all life — no matter how young or old, no matter the stages of development — has inherent dignity and value. The Scriptures testify that God has always pleaded for the protection of his most helpless and needy image-bearers. Another prevalent theme of the Bible is that God adopts believers into his own family. When we adopt, we are echoing his own compassionate work, giving the world a glimpse of the truth and beauty of the gospel.

He pats himself on the back for doing the good Lord’s work, first and foremost. And you know what? I don’t necessarily have a problem with that. I may have my problems with religion, but there are some folks who do a lot of good in the name of their faith.

What I have a problem with is when folks wrap themselves in a defensive shroud of piety while seeking attention. If that’s your game plan, don’t be surprised if you invite additional scrutiny. To be fair, perhaps scrutiny was inevitable for Halbert, especially when he says:

There are a number of problems that come up here. For starters, though they are correct about the fact that black children are adopted at a lower rate than their white and hispanic counterparts, that they view adopting a child of color as a form of compassionate work but conception of a white child as a blessing is nothing short of messed up.

Moreover, if they were seriously concerned about children who face challenges in finding a home, they probably shouldn’t have insisted on adopting infants, especially when thousands of children are aging out of the foster care system on a yearly basis and the odds of a child being adopted drop off sharply after the age of five.

It would also be much easier to buy the line about how important children are if they hadn’t adopted embryos. Halbert writes:

It was our commitment to the protection of the unborn and to the idea of continuing to add to our family that led us, last year, to the National Embryo Donation Center, a Christian embryo bank.

We live in a world with hundreds of thousands of embryos frozen in the United States alone. Most who aren’t selected by their biological parents are donated to science or destroyed or kept frozen. If Christians — or others — really believe life begins at conception, it follows that we should respond by being willing to support embryo adoption and even take part in it ourselves.

Obviously I’ve got major philosophical differences with this guy in terms of personhood, but that’s kind of the point. When this is the argument he’s making, it’s not about the kids anymore. It’s about dogma and ego and a political statement.

It’s all about him.

Listen, I’m really glad that his children have parents who love them. But I’m not interested in giving a cookie to a guy who seems more interested in patting himself on the back for inconsistent theology and racially tone-deaf nonsense than anything else.

Another way to put it? I’m not going to applaud for a guy with a major white savior complex.

This is not a new idea. White folks have long told stories and written songs and praised themselves for “saving” people of color, particularly in the name of God. Those savages we “found” when we got to the new world? Totally saved their souls with our smallpox blankets. Those black bodies we enslaved and carted across the Atlantic for our use and abuse? We were only rescuing them from their obviously pagan and inferior ways. Thank heavens the Spanish brought Catholicism to Latin America by the barrel of a gun because where would they be now otherwise?

While we’re at it, Instagram’s White Savior Barbie would like a word with all those hipster missionaries and voluntourists posting selfies in an endless quest for likes.

History is littered with stories from white folks who can’t wait to tell you all the great things they’ve done for someone of color in the name of God. And these stories all have one thing in common: it’s never about the person of color. It’s about the white person. Halbert is just one of the latest iterations. And that’s no way to frame your parenting.

To put it bluntly: children of color are not your social experiment, path to enlightenment, pious undertaking, proof of character, or honey trap for adulation. If you want to do right by them as an adoptive parent, get your mind right first.

April 22, 2016
Harriet Tubman Was Christian, but Other Women Who Will Be On Our Money Were Critics of Religion
Next Post