Last week the University of North Georgia Skeptics Society held an event designed to get people talking about reproductive rights. They made fetus-shaped cookies, handed out pizza, and put out signs that encouraged students to write down why abortion should stay legal. The event itself was pretty routine. There weren’t many complaints (other than from students who generally oppose abortion itself).

But the other day, after conservative blogger Matt Walsh posted this image from the event on Facebook, it quickly began circulating around the anti-abortion blogosphere: 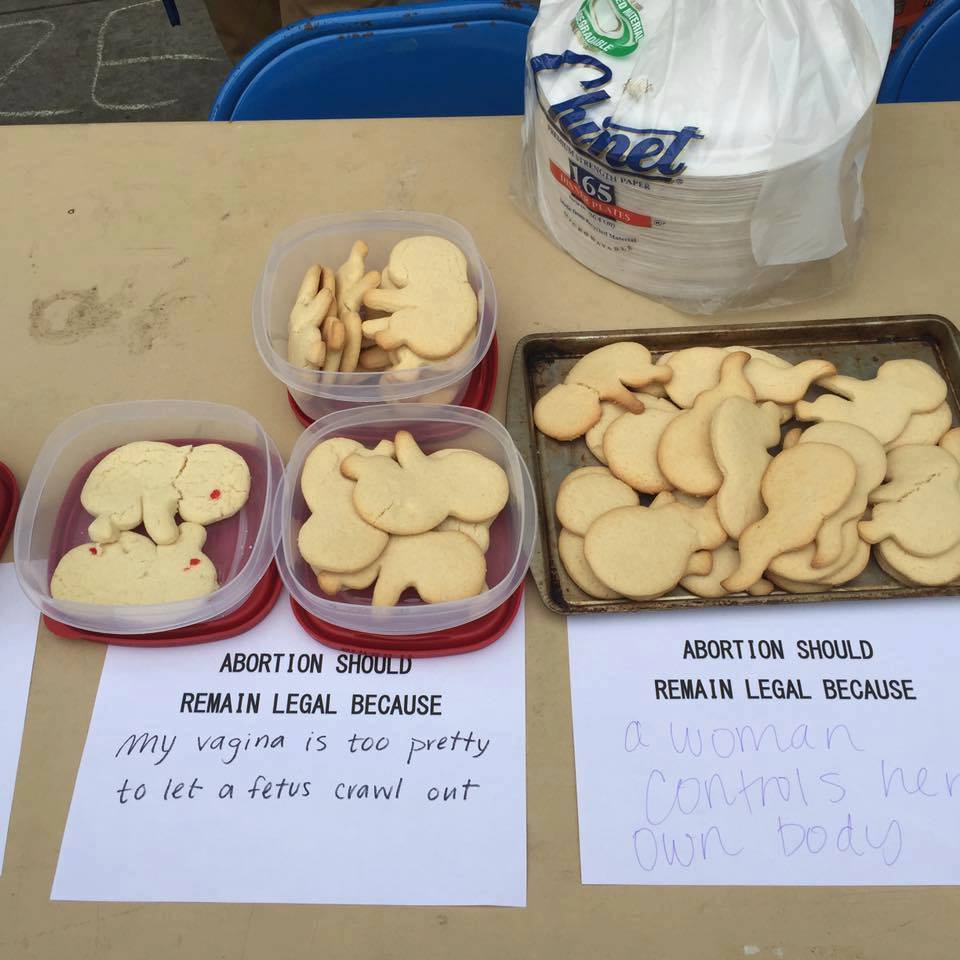 In that particular image, someone writes that abortion should remain legal because “my vagina is too pretty to let a fetus crawl out.” It’s clearly making light of a serious topic… something the anti-abortion crowd hates. (They more or less ignored the more traditional response next to it which advocated for abortion legality because “a woman controls her own body.”)

Adding to the controversy was the notion that some people were breaking the cookies in half, as if they approved of literally breaking the heads off of fetuses.

I cannot imagine why one of your members felt it a decent or clever thing to dismember baby cookies by breaking off their heads. Even to simply allow that on your table was tasteless, irresponsible, and vile—there is absolutely no removing yourself from that. Anyone who saw this should have been horrified. However the only assumption that can be made is that the cookie display best suited your stand. Indeed in a 20 week abortion the arms, legs, and head are ripped and torn apart to the unimaginable pain of the pre-born person. The cookie accurately depicted what being pro-choice means and you should not try to back away from what you support — which is indeed ripping off the pre-born persons head.

The group pointed out that students were allowed to write whatever they wanted. They didn’t know who made that particular comment. (Hell, it could have been one of the pro-lifers.) And — wait for it — some cookies just broke during the baking process. It happens. Some of the broken cookies were also used as paperweights on a windy day — it wasn’t a political statement. It was just convenient.

… These statements were written by individual students and they do not necessarily represent the opinions of the group itself. Being an organization which promotes free speech and discussion, the group decided not to remove any of the statements written by students during the event. Obviously, the photo may be perceived as crass; however, the individual who wrote it has every right to make such a statement. We determined the fetus shaped cookies used in the event to be the least graphic way to display a divisive topic on a diverse campus in the hopes of fostering discussion.

That explanation didn’t sit well with the Students for Life group, which put up its own angry statement reiterating many of the same points McCurry made earlier.

Since the pseudo-controversy is still raging on some anti-abortion sites, a UNG official sent this email to all students Wednesday night, essentially reminding everyone that the Skeptics group did nothing wrong since this is how free speech works. You don’t have to agree with it or like it.

I am writing to you this evening in response to activity by a recognized student organization on the Dahlonega Campus that is resulting in a high level of social media comments from observers and opinion writers who want to draw attention to it. Contrary to what is being shown in social media, it is important to note that two separate student organizations — one with a pro-choice position and one with a pro-life position — sponsored activities on the same day in the same area.

Conflicting viewpoints and the manner in which they are presented can be disturbing and highly offensive in some situations. However, as a public institution of higher education, we provide an environment that encourages respectful dialog about differing beliefs and values while preserving the First Amendment right of free speech, and the institution’s scope of intervention in these situations is limited. Each group followed university protocol for securing table space on campus or for conducting free speech activity in that space.

UNG is a values-centric institution and the passions of our students, faculty, and staff enrich our community. As we continue our dialogs, it is my hope that we all model civility and respect of others now and in the future.

Franc, an officer of the Skeptics group, told me that one of the anti-abortion groups on campus that day was handing out tiny plastic fetuses, which is somewhat ironic, since they were the ones chastising his group for the cookies. He also noted that one of the groups had a display “depicting bloody, mangled fetuses [and] comparing abortion to the Holocaust.” If the problem is one of imagery, then what about that?

… it’s really hypocritical for pro-life people to get upset over some sugar cookies when they tout graphic photos.

The reaction of Matt Walsh’s followers is ridiculous to us, not only because it is a gross misrepresentation of what actually happened at the event, but because of how they didn’t have anything to say about it at the event. The individual who sent the story to Matt Walsh posted on our page after the event, thanking us for such civil discussion and complimenting our group…

He’s not kidding about the compliments.

It just goes to show how some people are incapable of handling opinions which differ from their own. When you have an open forum, as the Skeptics provided, there are bound to be comments that are intended to provoke people. The one in question here wasn’t bigoted or even mean-spirited. It’s the type of statement you’d hear from a person who understands that a fetus and a human being aren’t identical. That some students couldn’t deal with that is all the more reason to keep holding events like this one.

April 22, 2016 Prince Remembered: A Final (Church) Sign o' the Times
Browse Our Archives
What Are Your Thoughts?leave a comment