A piece of artwork depicting a crucified Jesus hanging on a dartboard was removed from the Rutgers Art Library yesterday after Christian students began complaining about it. To be sure, this wasn’t a “live” board that people could throw actual darts at, but no matter. 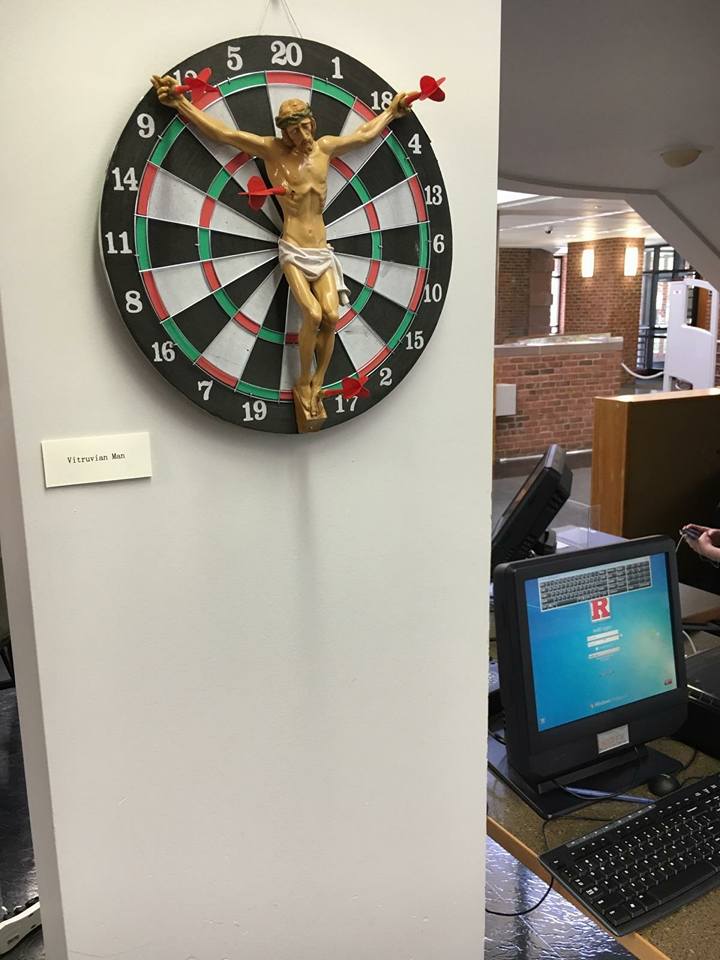 Jessica Pellien, director of communications at Rutgers University Libraries, said the exhibit was removed because it failed to meet the library’s policy for art displays. These policies require exhibits “to be based on University events, curricular offerings and topics of interest to the university community,” in broad terms.

That’s a long way of saying they removed it on a technicality, not because of the complaints. I don’t know if I believe that, but I really hope that’s the case. Artwork is about evoking viewers’ emotions. If it came down because some students interpreted it a particular way, then what’s the point of having art at all?

I’m actually surprised by the reaction. I get why some Christians were taken aback by the the dartboard… but this could just as easily have been designed by a Christian student.

After all, given the success of movies like God’s Not Dead, we know there are Christians who sincerely believe their God is constantly being persecuted. Portraying Jesus as the center of a dartboard — or the middle of a target — seems right up their alley.

(Image via Natalie Caruso. Thanks to Brian for the link)

April 22, 2016 Conservatives Are Flipping Out Over a College Skeptic Group's Abortion Rights Display
Browse Our Archives
What Are Your Thoughts?leave a comment