Rep. Tulsi Gabbard, on House Floor, Speaks Out Against Anti-Atheist Violence in Bangladesh

Earlier today, Rep. Tulsi Gabbard (D-HI) spoke on the House floor in defense of atheist bloggers (and others) who are being killed in Bangladesh by Islamic terrorists: 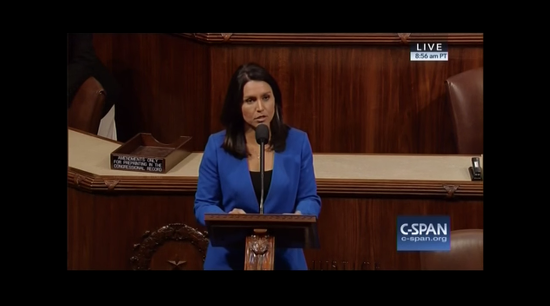 In Bangladesh, the horrendous brutal street assassinations of members of minority religions, secularists, and atheists violate every single value that we hold dear.

Just two weeks ago, 28-year-old Nazimuddin Samad was hacked to death in Dhaka, Bangladesh, after speaking out against the persecution of religious minorities on social media.

Evelyn Beatrice Hall, the late British author, wrote, “I may disapprove of what you say, but I will defend to the death your right to say it.”

In Bangladesh, discrimination and deadly violence against atheists, secularists, Hindus, Buddhists, and other religious minorities has unfortunately become a regular occurrence. This underscores the absolutely necessity of not only defeating this global wave of intolerance, but standing up and fighting for the right of others to freely express their views, regardless of whether you agree with those views or not.

I introduced H. Res. 396 to call on the government of Bangladesh to protect the rights of all of its religious minorities, including Christians, Hindus, atheists, and others. They have a responsibility to uphold the principles of its secular constitution, including freedom of religion and freedom of expression and take action against this senseless violence.

I encourage my colleagues to take action and support this resolution’s passage.

House Resolution 396 would call on Bangladesh’s government to “protect the human rights of all its citizens, particularly vulnerable minorities, strengthen democratic institutions and rule of law, and prevent the growth of extremist groups.”

It’s symbolic, but it still hasn’t gone anywhere. It hasn’t even had a subcommittee hearing yet.