LGBT issues expert Pat Robertson is convinced that, while they may be a handful of transgender people out there, most of them are frauds.

He then pointed to a scientific study to back this up. He pulled that idea straight out of his ass. 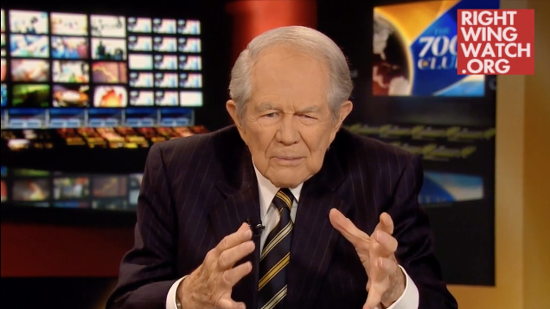 “People like that are relatively rare,” Robertson said. “So much of this other stuff is put up, it’s put on and it’s just a fraud. And it’s one more opportunity for the left to demonstrate against some aggrievement they claim to have that doesn’t exist. This is a phony, phony, phony cause to get involved in. ‘Well, I’ve got to look after the transgenders.’ This is nonsense.”

Let’s just run with this for a moment and say Robertson’s right. Why would people want to pretend to be transgender if they’re not? I promise you the bathroom voyeurism — which doesn’t exist — isn’t worth it. It’s not like there’s some huge upside to it. If anything, your life would be markedly worse if you impersonated someone who’s already discriminated against.

This isn’t some game liberals are playing. These are real lives that are being affected because people who share Robertson’s warped mindset are in government positions.

On what basis can Robertson say most transgender people are frauds? Absolutely none. Because he made it up. He says, to back up his point, that we never heard about trans issues until about 5 years ago… but that’s only because he wasn’t paying attention until recently. It was also safer for trans people to remain in the closet until relatively recently, and it’s not that much better now.

Robertson’s lie makes it easier for him to continue discriminating against trans people. Because the alternative — that trans people really are being treated unfairly, usually at the hands of Christians — would mean his community is to blame for it. He refuses to admit that.

April 20, 2016
Indiana Woman Expected To Give Birth To Healthy Crucifix
Next Post