Mariah Walton was born with a small hole in her heart. It could have been fixed with a relatively low-risk procedure when she was still a child, but her parents, devout Mormons, did nothing. They believed that through acts of faith, including lots of prayer, God would heal Mariah.

It’s an odd position, considering that, in their world, the Almighty created her, birth defect and all. Why would you beseech God, who is supposedly omniscient and has the perfect plan for everything and everyone in the cosmos, to undo what He knowingly created?

But that’s mere logic, and logic isn’t something that holds sway over most believers.

For some unfathomable reason, praying did nothing for Mariah (pictured). Now, at 20, her health is as bad as it’s ever been. She’s permanently disabled thanks to pulmonary hypertension. A respirator and an oxygen tank go everywhere she does. 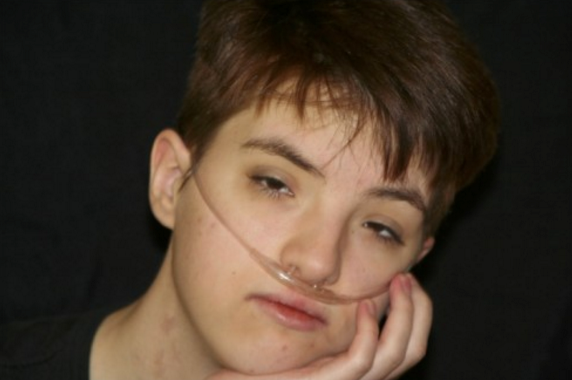 Mariah left home two years ago, and ultimately decided she wants her mother and father to get their comeuppance:

It should surprise no one that Mariah’s family lives in Idaho, where faith healing is not uncommon, and where its practitioners are protected by a “religious exemption” statue. In other words, if you or I don’t seek medical attention for our desperately sick child, we could be charged with negligence, or worse. But in Idaho, if religious parents do the same, the law gives them a pass.

Idaho is one of six states in the U.S. where parents can thus inflict negligent homicide or manslaughter on their own offspring, as long as they’re just following their faith.

What sets Idaho apart from states with similar statutes, though, is that the place is ground zero for the actual deaths of scores of kids whose parents chose faith healing over modern medicine. The phenomenon is especially rife among followers of a sect called the Followers of Christ.

One such Follower of Christ, the father of a faith-healed-to-death child, is on record as saying that

“This country was founded on religious freedom, and on freedom in general. … [But] all I see is an aggressive campaign against Christianity in general. It’s amazing to me in this day and age where Muslims get soft pedaled and Christians are under attack.”

Not a word, of course, about the freedom of children to just keep breathing.

One ex-member of the sect, who was lucky to escape with his life, recounts how he lost his faith at age five when a sick baby died in his arms, and pious adults told him he simply hadn’t prayed sincerely enough.

More insanity was to follow. When he was 12, his parents treated him for two shattered bones in his foot by

… rubbing the injury with “rancid olive oil” and having him swig on Kosher wine. Intermittently, they would have him attempt to walk. Each time, [he says,] “my body would just go into shock and I would pass out. I would wake up to my step-dad, my uncles and the other elders of the church kicking me and beating me, calling me a fag, because I didn’t have enough faith to let God come in and heal me, while my mom and my aunts were sitting there watching.”

What recourse do children of faith-healing parents have? What are Mariah Walton’s chances of seeing her parents legally held to account for what they did?

To bring change, and save lives, religious exemptions for faith healers must be scrapped. Five years ago, Oregon did precisely that. But in Idaho, that probably won’t happen as long as Christian Republicans rule the state, and as long as Followers of Christ fan Senator Lee Heider chairs the Senate health and welfare committee. Heider is openly hostile to reporters who raise the faith-healing issue, telling the Guardian writer that outsiders shouldn’t stick their noses in Idahoans’ business. When Heider is asked about sick kids who die due to lack of medical care, he essentially says his hands are tied:

“They spoke to me and pointed to a tremendous number of examples where Christ healed people in the New Testament.”

Pressure on the legislature is set to increase with a new TV campaign called “Let Them Live,” featuring Mariah as an example of faith-healing’s terrible record. The spots aim to make current religious exemptions of faith healing a thing of the past. You can donate to the project here.

April 20, 2016
Why is a Florida School District Giving a Christian with a Criminal Past Ample Access to Kids?
Next Post