In Afghanistan, Playing Music Can Be a Dangerously Subversive Act — Especially For a Woman April 19, 2016 Terry Firma

In Afghanistan, Playing Music Can Be a Dangerously Subversive Act — Especially For a Woman

To millions of hardline Muslims, music is against Islam — any music but the muezzin’s call. It could lead to joy… and sometimes even dancing. And so,

Playing instruments was banned outright during the period of Taliban rule in Afghanistan, and even today, many conservative Muslims frown on most forms of music.

Negin [Ikhpolwak, 19 years old] took her first steps learning the piano in secret, before eventually revealing her activity to her father. He encouraged her, but the reaction from the rest of her conservative Pashtun family was hostile. “Apart from my father, everybody in the family is against it,” she said. “They say, ‘How can a Pashtun girl play music?’ Especially in our tribe, where even a man doesn’t have the right to do it.” 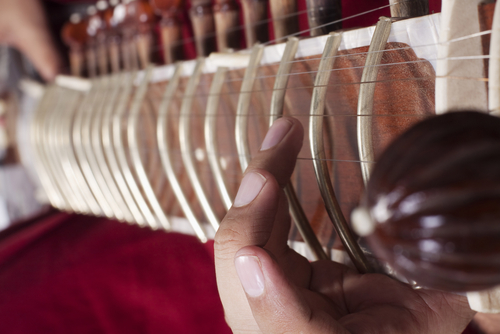 Ikhpolwak not only disregarded the comments; she started a women’s orchestra. So naturally, some of her male relatives threatened her with violence.

Now living in an orphanage in the Afghan capital of Kabul, Negin leads the Zohra orchestra, an ensemble of 35 women at the Afghanistan National Institute for Music that plays both Western and Afghan musical instruments. When she went home on a recent visit, her uncles and brothers threatened to beat her for a performing appearance on television, and she had to return to Kabul the next day. “Compared to women outside Afghanistan, we feel we are in a cage,” she said.

Other Afghan women who are passionate about playing music have similar challenges.

“When I have my musical instruments with me, people talk a lot behind my back,” said Mina, a trumpeter in the orchestra, whose mother is a policewoman in the eastern city of Jalalabad. “There are a lot of security problems, and if we go from one place to another with our instruments, then we have to go by car,” she added.

“I will never accept defeat,” she said. “I will continue to play music. I do not feel safe, but when people see me and say, ‘That is Negin Ikhpolwak’, that gives me energy.”

That‘s strength. The threats of the pious naysayers are the exact opposite: weakness and cowardice. The simpleminded brutes who want to control her, and beat her into submission, will never be a fraction of the human being she is.

April 19, 2016
The "Miracle Water" Came from Costco... and Other Secrets of a Crooked Televangelist
Next Post

April 19, 2016 Christian "Coach" Dave Daubenmire Makes the Case for Why "Discrimination is a Good Thing"
Browse Our Archives
What Are Your Thoughts?leave a comment