In a video released yesterday, “Coach” Dave Daubenmire, standing outside an abortion clinic, tried to make the case for why discrimination is perfectly okay.

Bigotry, he says, is bad. But discrimination? Fine!

It all leads to his point that discrimination against transgender individuals isn’t bigotry. It’s discrimination. And that’s why it’s perfectly acceptable. 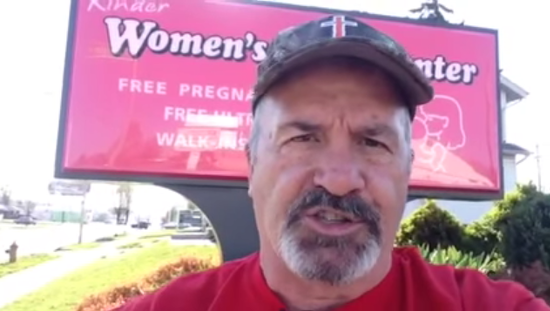 Daubenmire also forgets that if we’re going strictly by genitals, this could happen:

@PatMcCroryNC It's now the law for me to share a restroom with your wife. #HB2 #trans #NorthCarolina #shameonNC pic.twitter.com/4b4OdmfmeN

Not that logical arguments will change his mind. He’s got God on his side. That means rational thought goes right out the window.

April 19, 2016
In Afghanistan, Playing Music Can Be a Dangerously Subversive Act -- Especially For a Woman
Next Post

April 19, 2016 Hundreds of Mentally Ill People in Togo End Up in "Prayer Camps," Naked and Chained and Beaten
Browse Our Archives
What Are Your Thoughts?leave a comment