Author of Infamous “CES Letter” Has Left Mormonism: “I Have Excommunicated the LDS Church”

Jeremy Runnells is best known within Mormon circles for writing the CES Letter — a sort-of open letter that questions the foundational beliefs of the Church. I’ve heard from several former Mormons that they began their journey out of the faith precisely because they read that letter and realized they had been lied to their entire lives. (Needless to say, the person to whom the CES letter was directed never answered Runnells’ questions.)

For his efforts, Church leaders began proceedings to kick Runnells out. They wanted to excommunicate him for daring to ask difficult questions.

But they won’t have to have that meeting now. Last night, Runnells announced that he had resigned from the Church. They can’t break up with him, because he just broke up with them. 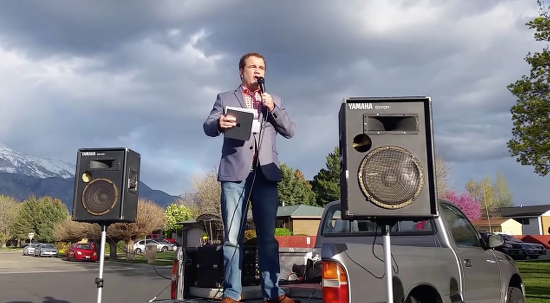 I have excommunicated the LDS Church, President [Mark] Ivans, and their kangaroo court from my life. I handed my resignation to President Ivans just a few minutes ago…

I am no longer a member of the Church… They refused to answer any questions that I asked them. I’ve asked questions over and over for the last three years… and they have not answered one question. It has become very clear to me that the Church does not have answers to the crisis.

The questions I asked the stake president over and over the last year and a half has been: What errors or mistakes are there in the CES Letter or my website that I can publicly correct? If there no errors or mistakes, why am I being punished for seeking and sharing the truth? What questions am I being punished for? And he never answered any of those questions once. Yet, that didn’t stop him from attempting to spiritually execute me. And I find that very, very disturbing, how they’re trying to take somebody’s salvation while not answering their sincere, reasonable questions.

I am disgusted by the LDS church’s… multiple attempts to place me in the same category as murderers and rapists and child molesters for simply seeking official answers to Church problems.

I have done nothing wrong. I just wanted the truth…

The only power that the Church has is the power that you give them. Tonight, I took back my own power.

Damn right he did.

Some of you may be thinking that this is all good news. Why would Runnells want to remain in the Church anyway? While most of the punishments associated with being excommunicated are symbolic, there are real consequences on an emotional level. It means he can no longer enter the Temple to witness the weddings of people he’s close to. He stands to lose his relationships with family members and friends who are still in the Church.

And for what? For daring to point out logical missteps in the faith. For asking tough questions about the Church’s history. He was going to be kicked out for being curious… but he didn’t give Church leaders the satisfaction of that. He left on his own will. That takes a hell of a lot of guts.

April 18, 2016
Toronto Writer, Raised a Catholic, Wonders If Letting Her Son Grow Up Without Religion Was Selfish
Next Post