In a long piece about the sex and fraud scandal (along with other trouble) that engulfed Alabama Governor Robert J. Bentley recently, Washington Post writer Neely Tucker reflects on the bizarre spectacle that may unfold shortly:

Eighteen months after he was indicted on allegations of using his office for personal gain and soliciting things of value [link], House Speaker Mike Hubbard, a powerful leader in the state Republican Party, is finally going on trial. Bentley is expected to be a witness. Should impeachment proceedings come to pass, they would be overseen by state Supreme Court Chief Justice Roy Moore, who was removed from office in 2003 for defying federal orders to remove a stone monument of the Ten Commandments from the rotunda of the state’s Judicial Building. 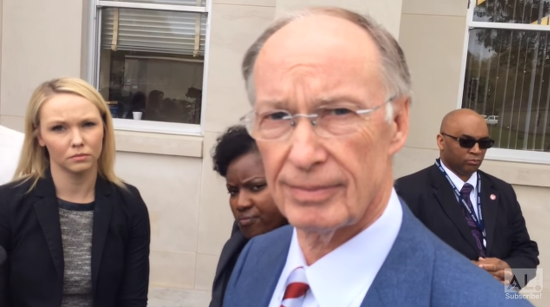 “If I sent this story to my fiction editor,” says [Mark] Childress, the novelist, “she would send it back and tell me to make it more realistic.”

Me, I’m just going to stock up on popcorn and enter a state of full-on Schadenfreude.

(Screenshot of Gov. Bentley via AL.com)

April 18, 2016
Members of the Wu-Tang Clan Will Appear at the Reason Rally
Next Post