If there were any doubts left about same-sex couples making great parents, a new study will shatter them.

Plenty of studies have found that children of same-sex couples fare just as well as those of different-sex couples; a few highly-cited but methodologically flawed studies claim that they don’t. Recently, a new study from the Williams Institute at UCLA used the same methodology as infamous anti-LGBT family studies but corrected the flaws in the data collection.

The results are unsurprising: Once again, kids with two moms or two dads prove just as happy and healthy as kids with a mom and a dad. 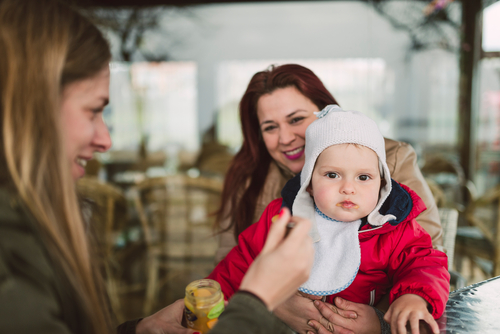 Using data from the National Survey of Children’s Health, researchers were able to identify same-sex couples who were raising children and compare them to demographically similar different-sex parents. Because few male same-sex parent households were included in the study, they focused on female couples, identifying 95 that they then matched against similar different-sex households.

The study found only one difference between the families: same-sex couples had more stress than their different-sex peers. But even with that distinction, there was no difference in the outcomes for their children, including their general health, emotional difficulties, coping behavior, or learning behavior.

The key difference in the way these studies have been put together is that anti-LGBT researchers, such as the widely criticized Mark Regnerus, primarily considered children in same-sex families where there were other factors that could have contributed to poorer outcomes, such as divorce. This study, on the other hand, “controls for committed couples,” or looks only at both same-sex and different-sex couples who have raised their children from birth and were not divorced or split up.

Regnerus — seemingly intentionally — didn’t account for family structure. In his study, he counted any child whose parent had had any kind of same-sex relationship at any point. As a result, most of the children he counted had experienced a parent’s separation or divorce, but they were still compared against children from stable different-sex families. The resulting negative outcomes for those children, he concluded, proved that same-sex couples make inferior parents. Regnerus’ data only included two children who had been raised from birth by committed same-sex couples, and their outcomes were just fine.

Similar population-based surveys from Donald Paul Sullins and Douglas Allen used the same trick of comparing unstable same-sex families to stable different-sex families. Sullins, for example, used data from the National Health Interview Survey, and admitted, “Almost all opposite-sex parents who are raising joint biological offspring are in intact marriages, but very few, if any, same-sex parents were married during the period under observation.” Sullins, like Regnerus and Allen, was comparing apples to oranges.

The only difference the study found was that same-sex parents seemed to be more stressed out than different-sex parents — and still, their kids had equally positive outcomes. This can easily be attributed to the added pressures of parenting in a world that, well, is still conducting studies trying to prove that you’re a bad parent:

This juxtaposition actually lends more credence to same-sex parenting. The higher stress rate should have correlated with less favorable outcomes for the children, but it didn’t. This suggests, the researchers reason, that the lesbian mothers might be using additional support systems like parenting groups or counseling services, and likewise, their kids may also develop greater resilience skills having to defend against the stigma of having same-sex parents.

In a CNN report about the study, study author Dr. Nanette Gartrell affirmed this analysis:

The study did note that lesbian parents seem to exhibit higher levels of parenting stress, which Gartell attributed to perceived homophobia. “Parents feel pressured to justify the quality of their parenting more than their heterosexual counterparts. We also suspect and feel that more study is warranted, but the cultural spotlight on same-sex parenting may be part of the stress,” she said.

Same-sex parents face exponentially more pressure and scrutiny when they have children than different-sex parents do, and still, they’re doing a damn good job. It doesn’t seem like we even need another study to show it, but as long as conservatives keep trying to prove otherwise, we might as well continue to demonstrate just how wrong they are. For the last time: the kids are all right.