Jehovah’s Witnesses Release Video Arguing That Evolution is a Myth

In the latest JW Broadcasting video put out by the Watchtower Society leadership, there’s a segment that discusses how evolution is a hoax. It comes by way of interviews with two JW scientists: Yaroslav Dovhanych, a Russian zoologist, and Professor Raj Kalaria, a brain researcher at England’s Newcastle University.

Thankfully, JW watchdog Lloyd Evans is there to dissect their lies.

You can see the relevant segment beginning at the 46:15 mark below: 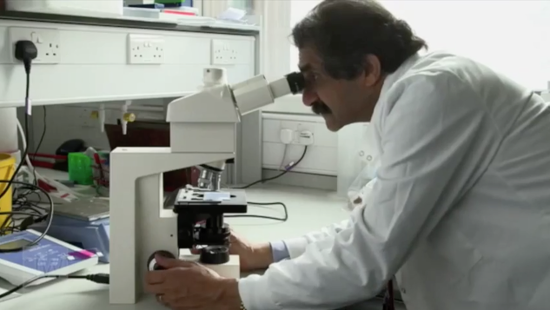 “The evolutionary theory, in my opinion, quite reasonably argued that there is no creator,” says Dovhanych, describing his pre-creationist experience. “[Evolution argues] that everything was shaped by a series of random changes and combinations.”

“As I started to wonder about this, whether there is a creator, I began to discover more facts contradicting the theory of evolution,” he muses. “Can anyone say that some computer programs appeared simply by chance? In contrast, evolutionists would like us to believe that DNA was formed by evolution. To illustrate, say you take some letter blocks, pour them on to the table, and the Encyclopaedia Britannica is formed. There is an even smaller probability that DNA originated by evolution.”

[Says Lloyd Evans:] … natural selection is far from a random process. When successive generations of an organism are shaped by their surroundings, and an environment selects which attributes are best suited to reproduction and survival, what we have is cause and effect. Evolution is a guided process, even if natural forces rather than a supreme celestial supervisor are doing the guiding.

Evans is absolutely right. Even Richard Dawkins has marveled at the power of natural selection and its ability to create things that look as if they were intelligently designed (even though they weren’t). Evolution may involve random mutations, but natural selection works because those mutations help species adapt to new environments.

Kalaria’s commentary is no better.

“We were taught about evolution of life, and this was just part of the curriculum,” said Kalaria. “At the time there were no other options, as it were. God did not come in the picture at all, or God creating the heavens and the earth, as it were, never came in the picture.”

Kalaria goes on to make the case for Intelligent Design because he has no idea how complex things, such as our brain, could have evolved “by random chance.” His ignorance apparently means God exists and the Jehovah’s Witnesses are right about everything.

We expect these sorts of arguments against evolution coming from members of the evangelical church, but the Jehovah’s Witnesses are equally ignorant on the matter.

At least someone’s willing to call them out on it. You can read Evans’ full response to the JW video here.