Four months after New Zealand ruled that representatives of the Church of the Flying Spaghetti Monster were legally allowed to perform marriage ceremonies, and two months after Karen Martyn became the first official Pastafarian celebrant (a.k.a. “ministeroni”), there has finally been a legally sanctioned Pastafarian wedding: 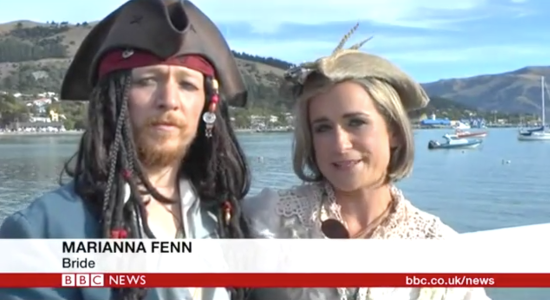 “When it came time for the kiss, the bride and groom slurped up either end of a noodle until their lips met,” the AP reported.

As for the vows? “The groom, Toby Ricketts, vowed to always add salt before boiling his pasta, while bride Marianna Fenn donned a colander on her head.”

During the service, Martyn, the ministeroni, explained some of the core beliefs of Pastafarians. “The Flying Spaghetti Monster created the world. We know that,” she said, according to the AP. “We weren’t around then and we didn’t see it, but no other religion was around to see it either, and our deity is as plausible as any other.”

How do I convince my wife to go back and redo our wedding…?

And should I assume their honeymoon will take place in Santorini?

By the way, Pastafarian Prophet Bobby Henderson wished them well: