After Not Standing for the Pledge, Atheist Student Told He Should “Move to a Different Country” April 17, 2016 Hemant Mehta

After Not Standing for the Pledge, Atheist Student Told He Should “Move to a Different Country”

I’ve heard of students being told they had to stand for the Pledge of Allegiance even though they legally don’t have to.

But I’ve rarely seen the adults at a school flip out over the issue as much as they did this week at Acadiana High School in Louisiana. 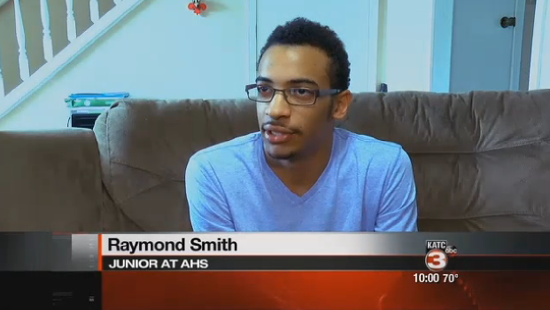 The student in question, for personal and religious reasons, does not wish to participate in the Pledge exercise in any manner. On Monday, April 11, he tried to remain seated during the recitation, but says he was intimidated into standing by his teacher, Mr. Romero, who reportedly used an expletive, yelling at the student and calling him “f—ing disrespectful.” The following day the student decided that he would try to find the strength to abide by his principles despite whatever bullying the teacher might inflict upon him. When he remained seated, the teacher took him out into the hall and lectured him about soldiers dying (apparently suggesting that opting out of the Pledge was somehow an insult to the military — an interpretation that is, of course, the subjective opinion of the teacher). The teacher then improperly demanded to know why the student wished to sit out, to which the student — who remained respectful at all times — replied that the exercise posed a religious conflict. The teacher was dismissive, saying there was no religious conflict, and warned that the student would be “taken to the office” if he continued to opt out. Then today, April 13, before the Pledge was even recited, Mr. Romero reportedly took the student out to the hall and again badgered the student for wishing to not participate in the exercise, telling the student he should move to a different country. The student tried to end the conversation several times, but the teacher would not allow it. Mr. Romero said the student would be written up each day if he didn’t participate, adding that he (the teacher) had the support of administration on the issue. He then sent the student to the office.

The student’s nightmare did not end there. This horrific treatment — of a young man who wishes nothing but to opt out of a voluntary exercise — was compounded when the student went to the office, where he was told (incorrectly) that federal law “has no say” on the matter and that Mr. Romero has the right to set his own rules regarding Pledge participation. He was then told that he would be required to take his class in the guidance office if he refused to participate in the morning exercise. The student tried to explain himself but was told that he was being “disrespectful.” He was then asked whether he had been allowed to opt out of the exercise at his last school, to which he said yes. He was then told, in what he reports was a very rude and unprofessional manner, that he “should have stayed at ECA where you can do what you want.”

My goodness… how many incompetent, ignorant people work at this school?

The fact is no one has to say the Pledge. No one has to stand for the Pledge, either. And refusing to participate in the mindless ritual doesn’t make you unpatriotic or a bad student.

The teenager in question here knew all of that. The people who were in charge of educating him didn’t.

Neither does the school board, apparently. Their official Pledge policy is unconstitutional to begin with:

Everything in bold is illegal. The district can’t force students to do any of those things.

The letter from the AHA may have had its intended effect, though, because District officials say they’ll be taking another look at that policy:

Superintendent Donald Aguillard said he and his staff have reviewed the letter, take the concerns seriously and are taking steps to address them.

“We are going to be working with our attorneys to make some changes to that particular policy,” Aguillard said.

The policy will be reviewed by the Lafayette Parish School Board in May.

“The Lafayette Parish School Board’s continuing educational mission includes ensuring that the rights of all students and staff throughout the school system are respected and upheld,” the district said in a news release.

I’d still like to know how that teacher and main office administrator are going to be reprimanded.

In any case, kudos to Smith for doing everything right. He knew the law. He knew to contact the AHA with his concerns. And he deserves a ton of credit for going public with his story, too. I hope he doesn’t have to deal with any repercussions or backlash as a result of all this.

(Screenshot via KATC. Thanks to Scott for the link)

April 17, 2016 We'd Like to Properly Caption All the Atheist Voice Videos
Browse Our Archives
What Are Your Thoughts?leave a comment