The “winner”? Mississippi’s House Bill 786, which would allow churches to create a security team with lethal power in order to kill possible intruders. Members of that team would then be “immune from civil liability” in case anything went wrong. 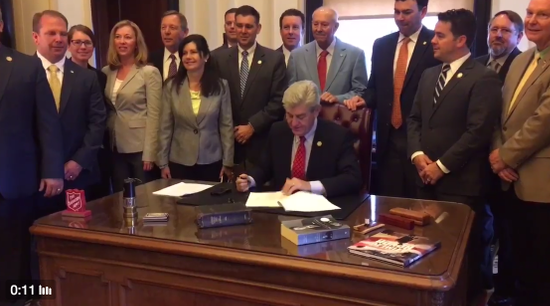 Churches deserve protection from those who would harm worshippers. That's why I signed HB 786. pic.twitter.com/WOxMAprXAc

Bryant said in a Twitter post he signed the bill because “churches deserve protection from those who would harm worshippers.”

The Police Chiefs Association says the bill would lower the bar for who can carry a concealed, loaded gun in public to include violent criminals, some severely mentally ill people, and chronic alcoholics.

Not that you needed another reason to skip church, but this should do it.

April 16, 2016
Female MP in Iran Could Lose Her Job Over Alleged Cross-Gender Handshake
Next Post