Bill Maher on Taxing Churches: We Shouldn’t Have to “Subsidize a Myth That We’re Not Buying Into” April 16, 2016 Hemant Mehta

Bill Maher on Taxing Churches: We Shouldn’t Have to “Subsidize a Myth That We’re Not Buying Into”

On last night’s episode of Real Time, Bill Maher made the case for why we should tax the churches: 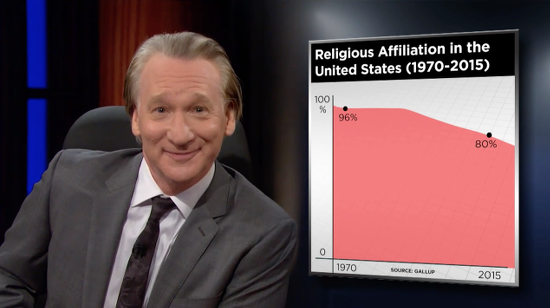 He argued that more people than ever before are non-religious, and we shouldn’t have to “subsidize a myth that we’re not buying into,” before making the “sin tax” argument:

If we levy taxes — sin taxes, they call them — on things that are bad to get people to stop doing them, why, in Heaven’s name, don’t we tax religion — a sexist, homophobic magic act that’s been used to justify everything from genital mutilation to genocide?

You want to raise the tax on tobacco so kids don’t get cancer?

Okay. But then let’s put one on Sunday School so they don’t get stupid.

The audience loved it, but would it really work?

In case you’re curious, taxing churches would theoretically bring in an estimated $71 billion a year. Not exactly chump change.

But there are some compelling reasons for why taxing the church would be a bad idea, and I lay them out in this video:

April 16, 2016
Canada's Prime Minister Took a Reporter's Sarcastic Comment About Quantum Computing and Ran With It
Next Post