Watch the Saudi Ambassador to the UN Explain Why Atheists Are Deemed Terrorists in His Country April 15, 2016 Hemant Mehta

It was two years ago when Saudi Arabia passed new laws saying atheists were considered enemies of the state, equivalent to violent terrorists. It didn’t make sense then, and it still doesn’t today.

So when Al Jazeera America’s Mehdi Hasan had a chance to interview Saudi ambassador to the UN Abdallah al-Mouallimi, he attempted to get an answer as to why atheism and other “thought-crimes” were such a problem. 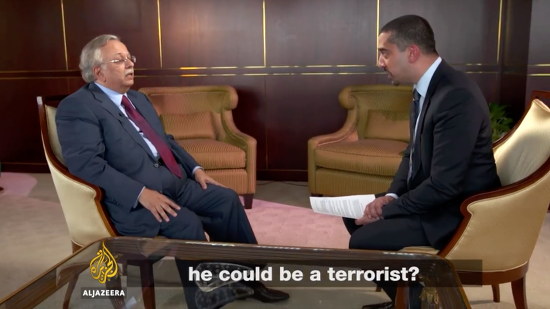 A transcript of the exchange is below.

HASAN: When you look at the human rights situation in Saudi Arabia, for example, some would say there are some bizarre rulings. Why is advocating atheism in Saudi Arabia now considered to be a terrorist offense? How do you explain that?

AL-MOUALLIMI: Well, somebody who says that and calls for it publicly is subversive and could possibly be a terrorist, yes.

HASAN: Merely by disbelieving in God, he could be a terrorist?

AL-MOUALLIMI: Well, if he was disbelieving in God,

HASAN: He’s not a violent person; he’s exercising his freedom of conscience.

AL-MOUALLIMI: … If he was disbelieving in God, and keeping that to himself, and conducting himself, nobody would do anything or say anything about it. If he is going out in the public, and saying, “I don’t believe in God,” that’s subversive. He is inviting others to retaliate.

HASAN: Even if that was subversive — and a lot of people would not agree with that statement — how is that terrorism? Aren’t you just emptying that word of all meaning when you say an atheist is a terrorist?

AL-MOUALLIMI: Well, in terms of subversion, disturbing public peace, disturbing the security of the country, all of that, he is inviting, he is provoking others to react in a way that would also be violent and unacceptable.

Got that, atheists? If you stay in the closet, no problem! But if you start trying to persuade people of your ideas, you’re inviting people to “also be violent.”

This is religious dogma at its worst. Because the Saudi government’s faith in Islam is so weak and would fall apart if challenged, the easiest way for them to prevent that is to silence any opposition that encourages people to think for themselves.

And this guy is their ambassador!

Memo to the God’s Not Dead screenwriters: This is what real persecution looks like.

(Thanks to Christian for the link)

April 15, 2016
This Alabama Woman Got Away With Running Several Horrendous Day Cares by Calling Them "Churches"
Next Post