The Duck Dynasty NASCAR Invocation Confirmed Every Stereotype Outsiders Have About the Sport April 15, 2016 Hemant Mehta

His invocation included a wish that a Christian man make his way into the White House: 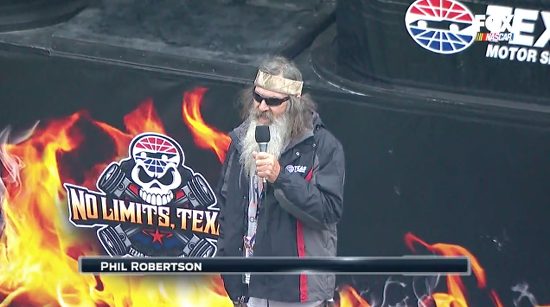 We got here via bibles and guns. I’m fixed to pray to the one who made that possible. Father, thank you for founding our nation. I pray, Father, that we don’t forget who brought us — You. Our faith in the blood of Jesus and his resurrection. Help us, Father, to get back to that.

I pray, Father, we put a Jesus man in the White House.

Help us do that, and help us all to repent, to do what’s right to love you more and to love each other. In the name of Jesus I pray. Amen.

It confirmed every stereotype outsiders have of NASCAR culture:

One wonders how Jewish, Hindu, Islamic or Buddist fans feel in the midst of NASCAR’s weekly, Christian-based pre-race prayer, not to mention those who happen to be agnostic or atheist. How must they feel when their favorite sport hands the microphone — week after week — to a series of “Jesus-men,” at the exclusion of all others?

Lots of words come to mind. “Welcome,” however, is not one of them.

It’s not about whether or not you agree with Phil Robertson. Plenty of people do, and plenty do not. It’s also not about whether you think we need a Jesus-man in the White House. It’s about welcoming everyone — people of all races, genders, religions and political beliefs — to our sport. Disenfranchising large numbers of current and potential fans by praying [publicly] to one (and only one) God makes as little sense as alienating others by flying the Confederate flag.

It is short-sighted in the extreme, and its time is long passed.

He’s absolutely on point. There are atheists who enjoy NASCAR, but they know full well that NASCAR doesn’t give a damn about them. If the sport wants to expand its fan base, this is the wrong way to do it.

April 15, 2016
The Catholic Church is Opposing a Bill That Could Help Sexually Abused Children Get Justice
Next Post

April 16, 2016 Canada's Prime Minister Took a Reporter's Sarcastic Comment About Quantum Computing and Ran With It
Browse Our Archives
What Are Your Thoughts?leave a comment