[CORRECTION ADDED: The original headline was “Roughly Two Thirds of British Muslims Say They Wouldn’t Inform Authorities of Terrorist Plot.” With that, I inadvertently made too broad a claim. The body copy was right all along; the headline overstated things. I’ve corrected it, and apologize for the error. — TF]

How is the integration of Muslims in the U.K. coming along? The polling firm ICM, hired by Channel 4 TV, quizzed 1,000 Muslims across the country, during face-to-face interviews.

The results are downright bleak. 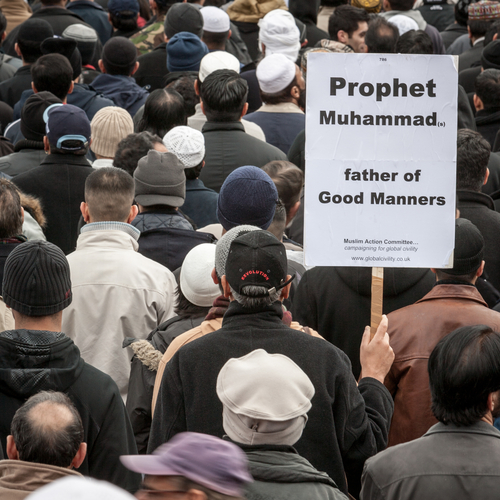 Only a third of British Muslims would inform the police if they thought that someone they knew is involved with terrorism, a poll shows. According to the survey, conducted on behalf the U.K.’s Channel 4, some 4 percent of British Muslims said they sympathize with suicide bombers, and the same percentage said they sympathized with people who committed terrorist actions in general. According to the Times, the figures amount to 100,000 individuals who sympathize with terrorists.

How about Muslims’ attitudes towards gay citizens?

Women’s rights? Nothing uplifting there, either.

39 percent said they believe wives should always obey their husbands, compared to 5 percent of the general public. Thirty-one percent expressed support for British Muslim men having more than one wife, compared to 8 percent of the country as a whole.

In another disappointing finding,

26 percent of British Muslims think Jews are responsible for most of the world’s wars, compared to 6 percent of the country as a whole.

The only result that might provide a ray of hope is that the poll’s Muslim respondents express stronger positive feelings for Britain than the overall population does.

86 percent of British Muslims said they feel a strong sense of belonging in the country, compared to 83 percent of the general population. Eighty-eight percent of those surveyed said they believe Britain is a good place for Muslims to live, while 78 percent said they would like to integrate into British life on most matters.

It’s worth pointing out that the poll has come under fire for being “skewed”; the Muslim Council of Britain (MCB) scoffed at it as “made for TV” and lacking in “academic rigor.”

“We understand the poll draws answers from areas where Muslims formed more than 20% of the population,” an MCB statement to HuffPost UK said. “These happen to be some of the most deprived neighborhoods in the UK with a disproportionately high number of people with a Pakistani or Bangladeshi ethnicity. Choosing specifically to poll in areas that are poor and more religiously conservative, skews the results and makes it indicative of these areas and not of British Muslims nationally.”

ICM and Channel 4 don’t think there’s much to that argument. A spokesperson for the latter told the U.K. Huffington Post,

“There is no evidence to suggest that Muslims have radically different attitudes to the issues surveyed depending on whether they live in areas of more than, or less than, 20 per cent Muslim population.”

If we assume that the poll numbers are broadly correct — and even if they somehow exaggerate the problem by an average of 10 or even 15 points — it’s still a poor showing for Muslims, and it’s hard to see integrative efforts succeeding in any major way in the foreseeable future.

Although Channel 4 is generally viewed as politically progressive (and though the station has occasionally bent over backwards to accommodate Muslims’ sensibilities), its poll is likely to give a boost to hard-right outfits like the UK Independence Party, the British National Party, the English Defence League, and Britain First. That might mean that strife and social unrest are likely to rise.

If anyone sees a way out of this morass, let me know.

April 15, 2016 Ken Ham's Ark Encounter Theme Park Will Only Hire Young Earth Creationists
Browse Our Archives
What Are Your Thoughts?leave a comment