The allegation comes after Nye did a video interview with Climate Depot activist Marc Morano, a global-warming denier who is also the man behind a skeptical film, Climate Hustle, that will premiere next month. 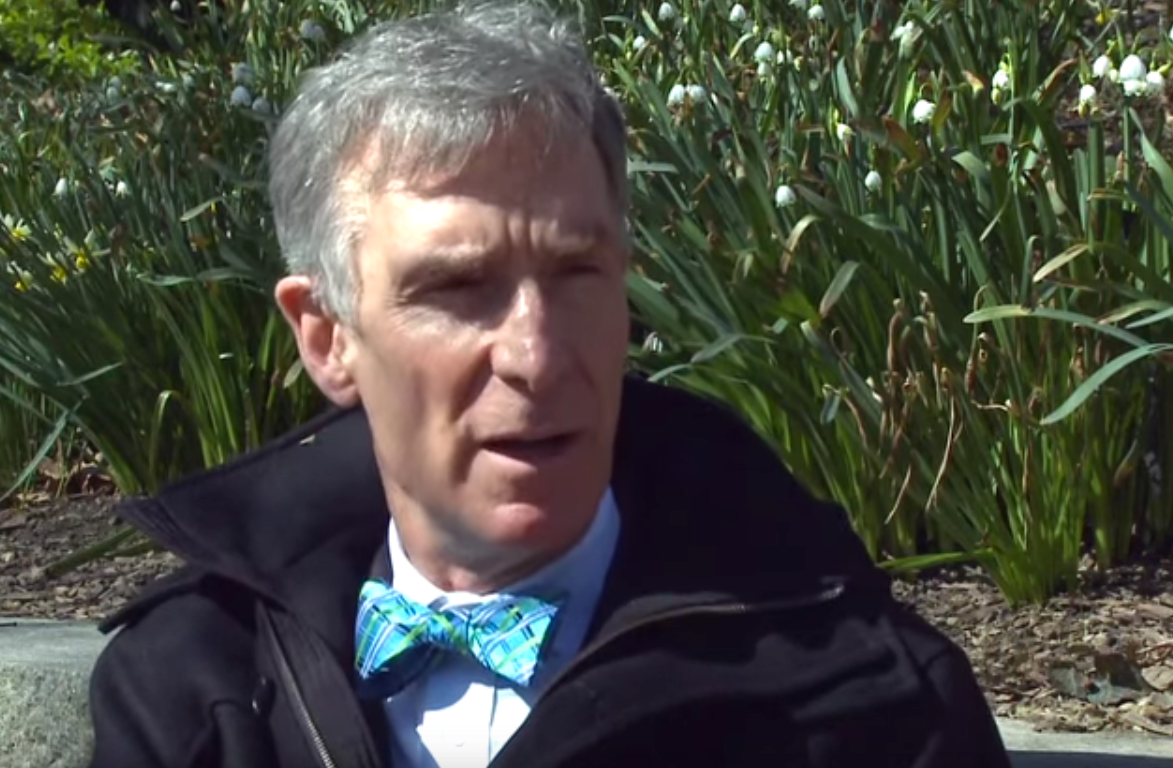 MORANO: We interviewed Robert F. Kennedy Jr., the environmentalist… He said that climate “deniers” — his word — energy CEOs belong at the Hague with three square meals and a cot with all of the other war criminals. What is your thought on that? And do you think some of the rhetoric on your side — as I am sure both sides — gets too carried away? What is your thought on jailing skeptics as war criminals?

NYE: Well, we’ll see what happens. Was it appropriate to jail the guys from Enron?… So, we will see what happens. Was it appropriate to jail people from the cigarette industry who insisted that this addictive product was not addictive, and so on? And you think about, in these cases — for me as a taxpayer and voter — the introduction of this extreme doubt… about climate change is affecting my quality of life as a public citizen. So I can see where people are very concerned about this and are pursuing criminal investigations as well as engaging in discussion like this.

The Washington Times headline oversells Nye’s position, but not by much. His answer is certainly not as unequivocal as it could have been; “we’ll see what happens” is disappointingly weak tea.

Nye could easily have said that he doesn’t advocate jailing people for thought crimes. Instead, he hypothesizes that perhaps climate change denial is not unlike the fraud and malfeasance that got Enron evildoers Jeffrey Skilling and Kenneth Lay prosecuted. With that, Nye ignores the fact that not believing in climate change could be a sincere (if almost certainly misguided) opinion, rather than a matter of deliberate chicanery.

Would Nye theoretically be open to jailing such skeptics? Or does his hypothetical only extend to deniers who knowingly cook the books? Or to neither of them?

The one-minute snippet Morano posted has little context; it would have been helpful to hear more of what came before and after. Also, there is a cut at the 30-second mark that may signal that something Nye said was edited out.

We are reaching out to Bill Nye for clarification and will update this post if and when we hear from him.

Meanwhile, if you find yourself wavering, and you think that maybe some climate-change skeptics do deserve to be brought up on charges of heresy or fraud, I’d love for you to spend just three minutes listening to the much-missed Christopher Hitchens. In his 2006 speech at the University of Toronto, below, Hitchens says he is very proud to have defended the Holocaust revisionist David Irving, who’d been jailed in Austria for his unorthodoxy. Start at 4:28 and let us know what you think.

P.S.: I use “climate-change denier” and “global-warming denier” as shorthand, but I’m actually not too happy with those terms. Any remaining debate about the topic isn’t over whether climate change is really happening. Rather, people like Morano wonder if the climate change that they acknowledge is occurring is anthropogenic, or is just part of Earth’s natural climate cycle. (For the record, I believe that anthropogenic global warming is real and should be combatted, so hold your barbs and arrows.) I just wish there was a brief, simple term that made the distinction clearer and finally got the nomenclature right.