How Donald Trump is Driving a Wedge Into the Religious Right April 14, 2016 Hemant Mehta

How Donald Trump is Driving a Wedge Into the Religious Right

In case you missed it the other night, Rachel Maddow had a great segment on how Donald Trump is basically destroying the powerhouses of the Religious Right.

We already know how he’s showing you don’t need to be authentically evangelical — or even accept conservative Christian “morality” — to get that crowd’s votes. Now, Phyllis Schlafly‘s organization, Eagle Forum, which has had an outsized effect on conservative politics over the past few decades, is going through an upheaval because there’s a difference in opinion over her support of Trump.

It’s a 20-minute segment but well worth your time: 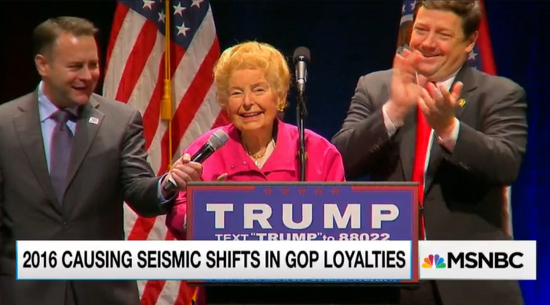 It’s very tempting to hope Trump does well — at least through October — just to cause as much chaos as possible within the ranks of the Right.

April 14, 2016
Bangladeshi Prime Minister: Criticism of Religion is "Filthy"; "Why Should We Tolerate That?"
Next Post