Fox News Host: The “National Day of Reason” Resolution Shows the “Downward Decline of This Nation”

The pundits at Fox News Channel are furious that legislators have proposed a purely symbolic resolution calling for a National Day of Reason in response to the National Day of Prayer.

House Res. 670, which was encouraged by the American Humanist Association and introduced by Rep. Mike Honda (D-CA) and Del. Eleanor Holmes Norton, merely says we should employ “reason, critical thought, the scientific method, and free inquiry to the resolution of human problems and for the welfare of human kind.”

But thinking critically goes against everything the people at Fox stand for, so the hosts of Outnumbered had to complain about it. 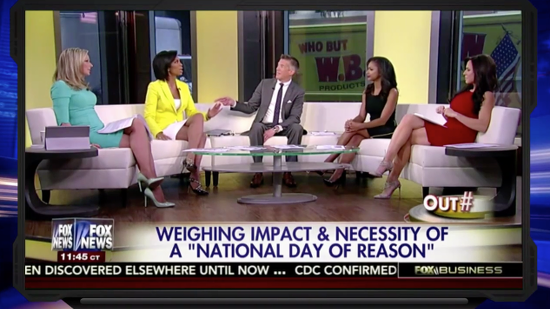 Host Mike Baker called the resolution evidence of the “downward decline of this nation,” but that wasn’t even the worst comment.

That honor, as it so often does, went to host Andrea Tantaros, who said at the end of the segment:

I think it’s rich, Sandra, that Washington, D.C. is calling for a Day of Reason. This is coming out of Capitol–isn’t that rich? Washington, D.C., saying “We need more reason”? I think atheists, this culture, has become so secular, and so coarsened, and so godless, I think the atheists–I think they’ve won a lot of battles and they get most days in this country. Let the Christians have the National Day of Prayer. I mean, really.

That passage is so densely packed with nonsense that I’m afraid I’ll fall into a black hole of ignorance. But let’s try picking it apart anyway.

1) Atheists “get most days in this country”? Which ones? If you count just the big federal holidays alone, Christians have Good Friday, Easter, Christmas Eve, and Christmas. Then there are the minor holidays that have religious origins. Atheists have nothing. (Cue your relatives saying we have April Fools’ Day. Hilarious.)

2) This isn’t even an “atheist” day. It’s literally a day promoting reason. The resolution doesn’t advocate atheism. It doesn’t slam religion. It suggests we should think carefully and weigh the evidence before making decisions. Even if it’s supported by atheist groups, it’s not a pro-atheism resolution. There’s no reason anyone should be against this.

4) Tartaros says our culture has become “so godless”… as if that’s a bad thing. If only she were right. As sociologist Phil Zuckerman points out, the least religious countries in the world “tend to fare the best in terms of crime rates, prosperity, equality, freedom, democracy, women’s rights, human rights, educational attainment and life expectancy.”

5) In the clip, Baker didn’t like how atheists wanted to “shove your non-belief down my throat.” But if this resolution is doing that — which it isn’t — then what exactly is the National Day of Prayer if not a way for Christians to shove religion down everyone else’s throats?

If this resolution is so offensive to those hosts, let’s make a deal: We’ll give them all the atheist holidays and they can turn them into 24-hour-long, Jesus-loving celebrations.

In return, we get to secularize all the Christian ones.