For some reason, the Chino Valley Town Council in Arizona used to begin meetings with invocations delivered by elected officials (which the law doesn’t permit). So for a couple of weeks, while they decided on a legal alternative, the council members promised to skip the invocation during meetings. Eventually, though, they settled on something that was still a problem: 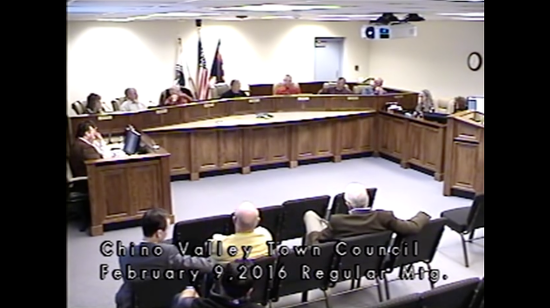 After discussing eight different options on how to handle the invocation at future Town Council meetings, the council voted that they would make no changes to the current tradition, which is a member of council gives the invocation without any guidance if they wish to be in the rotation to do so.

So let’s be clear about how prayers work in Chino Valley:

Knowing they were in for a legal battle, the Council finally changed its policy on Tuesday:

… Going forward, the council will meet in private before meetings start to hold an invocation out of public view.

During their remarks, councilmembers said they were unhappy they had to change the policy but understood the need to do so.

“I just feel like it’s a sad day when we have to make decisions based on monetary reasons,” Councilmember Lon Turner said. “I have really disliked the idea that this small community has been infringed upon, as far as I’m concerned, by the likes of the ACLU, Freedom From Religion. As far as I’m concerned, those folks can stay wherever they’re at and leave us alone. Maybe they ought to find a real job.”

They do have real jobs, actually. It’s making sure government officials are doing their jobs.

One of the other options available, of course, was to keep the invocations in the meetings, but open them up to anyone who wanted to deliver them. The council members didn’t want anything to do with that, because it might have led to invocations from unsavory, non-Christian groups:

“I don’t want prayer to become a travesty,” Marley said. “It is a sacred thing, and I’m in agreement with Councilmember Turner, I’d rather have no prayer at all than have it turned into a comedy routine where we have a rapper come up and decide he’s going to rap his prayer.”

Hey, that’s not a bad idea…

Anyway, the new policy works just fine. The council members get to pray together before the meeting begins. Someone should tell them they can also pray at home beforehand or in the car on their way to city hall.

As long as the actual meetings are religion-free, there shouldn’t be a problem. Too bad it took this long for the council members to figure out how the law works.

April 14, 2016
Wisconsin Moms Are Preaching to Kids During "Jesus Lunches" and This High School Wants Them to Stop
Next Post