TN Republican Who Sponsored Anti-Trans Bathroom Bill is Found to Be a “Risk to Unsuspecting Women” April 13, 2016 Hemant Mehta

The other day, Terry wrote about how more Republican politicians than trans people have been busted for sex acts in bathrooms.

Now, Jeremy Durham, a Republican legislator from Tennessee who advocated for one of those anti-trans bathroom bills, has been dubbed a “continuing risk to unsuspecting women” by the state’s Attorney General Herbert Slatery. 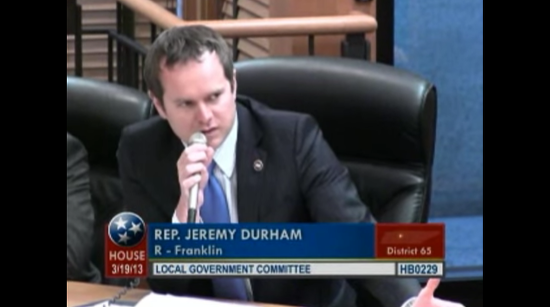 “Based upon the information gathered thus far, Representative Durham’s alleged behavior may pose a continuing risk to unsuspecting women who are employed by or interact with the legislature,” Attorney General Herbert Slatery said in a letter to House officials.

In accordance with the attorney general’s findings, [House Speaker Beth] Harwell, R-Nashville, is limiting Durham’s access to certain legislative buildings — including moving his office across the street — and he has been barred from having contact with almost all staff or interns as the investigation continues.

An investigation found that Durham had acted inappropriately toward several women who work in the State Capitol to the point where they don’t feel safe in his presence. He allegedly “initiated contact about non-legislative matters and attempted to meet the women alone” and “made inappropriate comments of a sexual nature or engaged in inappropriate physical contact with some women,” according to interviews with nearly three dozen women. (Durham denies all the charges.)

Durham, a Baptist, is the same guy who sponsored House Bill 2414, which would prevent trans people from using the bathroom that matches their gender identity.

Just add that one to your Republican hypocrisy files.

(Screenshot via YouTube. Thanks to Casey and Kevin for the link)

April 13, 2016
Be Nice, Don't Talk About Faith: a New Pew Poll Looks at the Absence of Religious Conversation
Next Post