Survey Says 13% of Atheists/Agnostics Have Asked God for Help in the Past Week. What the Hell? April 13, 2016 Hemant Mehta

Survey Says 13% of Atheists/Agnostics Have Asked God for Help in the Past Week. What the Hell?

A new Pew Forum survey on how religion plays a role in our everyday lives had one particular section that I’ve stared at for the longest time because I can’t make sense of it.

Here’s what they asked people:

In the past week, did you thank God for something?

In the past week, did you ask God for help or guidance about something?

In the past week, did you ever become angry at God?

If you’re an atheist or Agnostic, you should answer “No” down the line. The alternative suggests you think God is listening, or has something to do with whatever’s going on in your life, or exists.

Instead, look at the results for the non-theistic crowd: 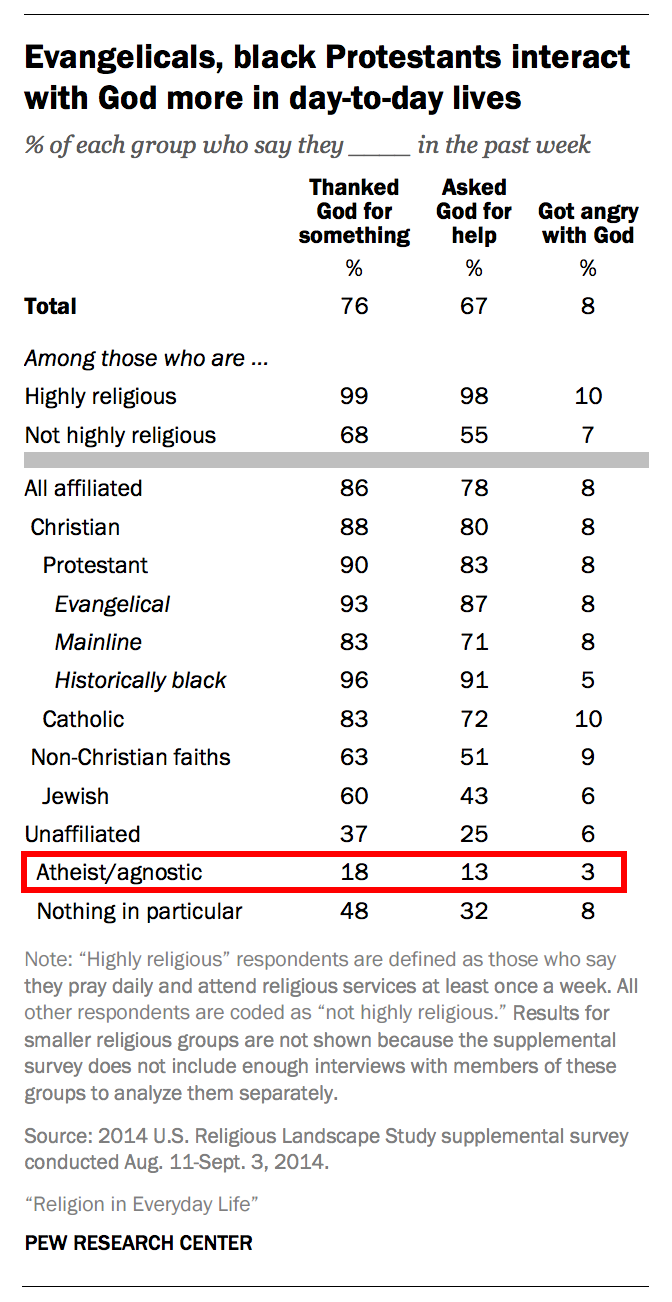 I’m willing to look past the 3% who got angry with God, because there are always “those people” in every group…

But 18% of atheists and Agnostics thanked God for something?! Unless they meant it ironically or said it accidentally, I don’t get it. Are we including everyone who said “thank God” as a figure of speech…? Hell, I do that all the time. I guess we can explain that away if we really want to.

The 13% who asked God for help or guidance, however, didn’t do it accidentally or figuratively. They must have meant it. WHO ARE THESE PEOPLE?! Someone please explain this to me.

Normally, we’re lumped in with the “Nones” who believe in God but just don’t belong to an organized religion. Numbers like this make sense in that context. That’s not the case here. Atheists/Agnostics are isolated from everyone else. So what gives?

It’s worth noting that Pew also found last year that 5% of atheists and 14% of Agnostics believe in Heaven. It’s a reminder that even people who claim to be rational can be guilty of logical inconsistencies.