Pastafarianism is Not a Real Religion, Judge Tells Prisoner in Completely Serious Decision

Stephen Cavanaugh is a prisoner currently being held in the Nebraska State Penitentiary. As a prisoner, he has the right to practice his religion and get special perks associated with being part of an organized belief system — as he says, “the ability to order and wear religious clothing and pendants, the right to meet for weekly worship services and classes and the right to receive communion.”

But Cavanaugh filed a lawsuit recently saying the prison was denying him these opportunities… all because he was a Pastafarian. (Seriously.) 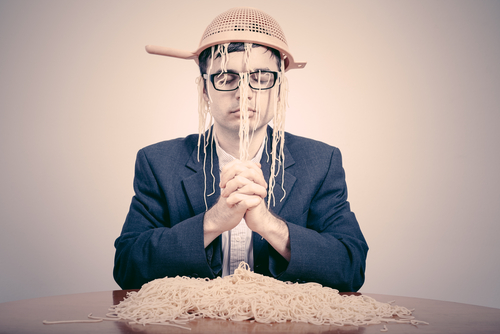 If you believe in the Flying Spaghetti Monster instead of Yahweh, do government officials have to give you the same perks that followers of traditional religions receive? That’s what Cavanaugh wanted to find out.

And yesterday, U.S. District Judge John M. Gerrard ruled that Pastafarianism wasn’t a real religion and its followers are therefore not entitled to the same protections. Gerrard also said that Cavanaugh never really explained “how the exercise of his ‘religion’ has been substantially burdened.”

If you want to get into the details, there is a law (known as RLUIPA) that says prisoners have religious rights, too. Last July, in a lawsuit filed by the American Humanist Association, courts found that Humanism (i.e. a non-theistic religion) also qualifies under that umbrella. So explicitly godless “religions” must be treated as other religions under the law.

But Pastafarianism? It doesn’t count, says Gerrard. Because to take its Holy Book seriously would be downright hypocritical on its own terms:

It is not clear from Cavanaugh’s complaint whether his professed adherence to FSMism is grounded in that [Humanistic] argument, or in a literal reading of the FSM Gospel. But to read the FSM Gospel literally would be to misrepresent it — and, indeed, to do it a disservice in the process. That would present the FSM Gospel as precisely the sort of Fundamentalist dogma that it was meant to rebut.

That’s not to question whether Cavanaugh is right or wrong about God — that’s not for the Court to decide — only that it doesn’t even seem like Cavanaugh has any serious beliefs that could be considered part of a religion:

… aside from identifying the FSM Gospel, Cavanaugh has not alleged anything about what it is that he actually believes — leaving the Court to read the book. And it is no more tenable to read the FSM Gospel as proselytizing for supernatural spaghetti than to read Jonathan Swift’s “Modest Proposal” as advocating cannibalism.

I can’t believe I’m reading this.

In short, Judge Gerrard says that Pastafarianism isn’t a religion just because Cavanaugh says it is, and he has no leg to stand on when he claims his religious rights are being violated.

The Judge goes on to state that Cavanaugh also doesn’t explain how his religious practice is burdened by government officials: What exactly can’t he do because the government won’t let him?

Cavanaugh’s contention seems to be that denying him a pirate outfit prevents him from evangelizing about FSMism. But it is not clear to the Court how such a limitation significantly burdens Cavanaugh‘s practice of his “religion,” as opposed to constraining his ability to preach to others. Cavanaugh does not specifically identify the other “religious” practices he seeks; they would presumably include such things as grog, a parrot, a seaworthy vessel, a “Colander of Goodness,” and to take off every Friday as a “religious holiday.”… But even if denying those accommodations would make it more difficult for Cavanaugh to practice FSMism, it would not make him effectively unable to do so, or coerce him into acting contrary to his beliefs.

This is the greatest legal document ever.

Ultimately, Cavanaugh’s claims were dismissed. I’m not sure how he’ll go on, though it looks like he’ll be free on parole this summer, so at least he won’t suffer too long.

The Flying Spaghetti Monster shed a single tear. Which I assume contained olive oil. Which was then mixed with the spaghetti and fed to us by His Noodly Appendage. rAmen.

April 13, 2016
TN Republican Who Sponsored Anti-Trans Bathroom Bill is Found to Be a "Risk to Unsuspecting Women"
Next Post